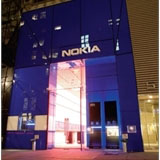 In an attempt to stand out, Sony Ericsson and Nokia are gearing up to open UK flagship stores that offer media-rich experiences, says Sarah Balmond

Bringing in Checkland Kindleysides to design its first UK flagship store on London’s Kensington High Street is a timely move by Sony Ericsson.

Not only has the mobile phone manufacturer unveiled a fresh brand campaign designed by Wolff Olins, it is also celebrating its five-year anniversary following the joint venture between Sony and Ericsson in 2001. Most intriguing, though, is the fact that the handset manufacturer will steal a march on rival Nokia, which is also poised to unveil its long-anticipated UK flagship next autumn on London’s Regent’s Street (DW 29 June). The interior design is by the creator of the Apple Computer stores, US consultancy Eight Inc, and will be of great interest to those working in the retail space.

As product functionality develops and competition increases, there is a growing need for handset manufacturers to carve out their own space on the high street. A bricks-and-mortar venue is fast becoming a necessary platform from which to offer customers more interactive facilities – such as downloading and printing – and to show off the brand better.

Both Nokia and Sony Ericsson are using the skills of external design consultancies to help create unusual interior schemes that provide stand-out from the more monolithic design templates commonly seen on the high street in the form of cheap and cheerful mobile phone chains. But just how exciting these retail environments will be remains to be seen.

Salvatore D’Angelo, head of global retail at Sony Ericsson, is not giving much away, despite the imminent store launch next month. However, he does explain that the design will feature natural materials and a bright colour palette. ‘We wanted to move away from the blacks, blues, greys and silvers which feature a lot in our industry,’ he says.

The interior will also integrate tactile surfaces, used on Sony Ericsson handsets, into the overall design scheme. Inside, customers will be able to buy handsets, accessories and other items from the Sony family of products, such as printers and ringtones. They will also be able to print out photographs and use facilities to store images. Given its close proximity to the Sony Ericsson headquarters in Hammersmith, there is also the long-term vision of using the store as an entertainment venue.

‘We don’t want a static or uninspiring environment,’ says D’Angelo. ‘Often you are presented with black shiny phones with lots of buttons and that’s it. But we want to go beyond that. There is a lot more you can do with a store. We want to get consumers to try our products, creating a warm and comfortable environment, so they don’t feel threatened. There will be areas for customers to relax in. In the retail environment, we want to demonstrate all the functions of the mobile phone, such as its music and photographic applications, to offer the total Sony Ericsson experience.’

The interior will be trialled at the London store, but could be used as a template for a future international roll-out. Sony Ericsson is in the process of evaluating other key destination cities, adds D’Angelo.

Nokia has equally ambitious retail plans. It is aiming to open 18 international flagship stores. Mexico City will launch before the end of this year and five more stores will open next year. In all instances, Eight Inc is the lead creative consultancy, but Nokia will continue to work with designers to help implement the design at a local level. For example, Dalziel & Pow is fitting out the interior design for the London flagship store.

‘We are investing a lot to help create a site that will change the store of today. It is important to give rich interaction and a full experience of the brand. The design is about purity and technology. We want to create an interactive and playful dialogue among Nokia customers,’ says Federico Barbieri, Nokia global retail marketing director.

The shop will feature a ‘digital wallpaper’ made up of a series of LCD screens with floor-to-ceiling LED panels. This interactive surface will play back customers’ video and text messages and change colour according to the weather or customers’ movement. Visitors will also be able to select colours and abstract scenes consisting of motion and colour via text message to change the appearance of the screens. Tomato, Hi-Res, Universal Everything and This is Real Art are collaborating to help create the varying content and animations for the stores’ multimedia displays. In addition, the screens will link to other Nokia flagships, allowing customers to communicate with each other digitally, creating a virtual ‘three-dimensional network’, says Barbieri. 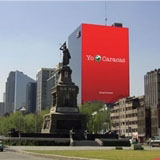 The interior will feature a Modernist design with cues that reference the company’s Finnish heritage, says Jeremy Wright, global retail concept development director at Nokia. This will include a silver birch ceiling to provide additional ‘warmth’. Fashion company Stone Island is designing staff uniforms for the company.

It seems the battleground for handset manufacturers and the quest to wrest design credibility is evolving and finally coming to the streets.

• Others to launch in Mexico City and London

• First flagship to open in London next month

• Other sites being evaluated