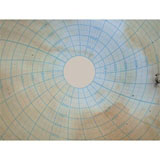 Going Green doesn’t necessarily mean lower quality printing – the range of recycled papers now available is enough to satisfy the most discerning client. Yet there are other environmental factors to consider too, such as finishing processes and the sourcing of local materials, says Lauretta Roberts

THE UK public clearly has very mixed emotions when it comes to the medium of print. On the one hand, it vociferously and frequently demands that less print is produced, usually offering only partly informed opinions about its environmental impact as justification. Yet, on the other hand, demand for print in this country is on the up – we produce about £14bn worth per annum, making the UK the second largest print market in Europe behind Germany.

£14bn sounds like a lot of trees and it probably is. But it’s not as many as you might imagine, since, according to the Confederation of European Paper Industries, 30 per cent of the world’s paper- making fibres come from recovered paper and board, and much of the rest come from trees that are grown for the purpose. Yes, there are horror stories of less scrupulous paper-makers illegally logging, but there are many safeguards that designers can employ to ensure the paper they select is as environmentally sound as possible. Looking out for accreditation from organisations such as the Forest Stewardship Council and Programme for the Endorsement of Forestry Certification Schemes is a good start.

Andy Seal, head of print publishing at the Department for Transport, is part of a team that is charged with Greening up the wider Government’s print production, through the Print Services Framework. Seal has spearheaded the use of recycled papers across Whitehall and other public departments, and by the designers and printers that serve them. He’s been impressed by the choice and quality of recycled papers available and has identified 50 of various tints, textures and formats to appear on the Framework. He always looks for at least some recycled content, be it 50, 75 or even 100 per cent, with the balance made up from an accredited fibre.

‘As far as the public sector is concerned, the primary concern has to be landfill avoidance – we need to be sure we’re recycling our waste. Others would prefer to have virgin fibre, but it has to be FSC accredited. I think both are required because you need to replenish the recycled stock,’ he says, adding that paper fibres can only be recycled a maximum of six times before the fibres become too short.

Earlier this year, David Shorto, who is responsible for purchasing print and paper for Greenpeace and Friends of the Earth, set up his own website to help designers specify printers and papers based on their environmental credentials. Shorto’s site (www.twig.uk.com) goes beyond just telling designers where they can source Greener print, with information on how to design for it too. The site contains a number of practical tips for designers about how to ensure that their printed products are recyclable and that the processes used to produce them are as kind to the environment as possible.

Twig also debunks some of the myths surrounding the print and paper production process (‘The chemicals used to extract ink from paper are toxic: not true’) and encourages designers to think beyond the obvious when it comes to going Green. There are many, often cost-neutral ways to minimise environmental impact, agrees Russell Thompson, head of production at London design group Merchant. ‘There are two sides to the environmental debate. There’s marketing and labelling, and then there’s the authentic side. To get a label, you need to do something authentic, but you can be doing something authentic that you don’t get a label for, such as sourcing all your print and paper within an 80km radius of the delivery point. The reality remains that there is a benefit to the environment of that,’ he says.

At Beacon Press in Uckfield the concept of ‘print miles’ has been taken very seriously indeed. Sales and marketing director Richard Owers explains that, through careful selection of paper for the guide it produced for last month’s London Design Festival, it saved nearly six tonnes of carbon emissions. ‘That’s 20 000 miles in a car,’ adds Owers. The paper concerned was Era Silk, which is produced locally to Beacon, in Kent, by M-real, and is made from 50 per cent virgin fibre and 50 per cent fibre that is recovered and collected from within a 160km radius of London.

For another project, D&AD’s Ampersand magazine, Beacon went further afield for its paper – Boston in the US. In print miles, this may seem extravagant, but the paper concerned, Mowhawk Options, was produced at a wind-powered mill and is made from 100 per cent recycled fibre. ‘As long as you don’t go mad and fly it over, if it’s coming by sea, the environmental impact is very low indeed,’ says Owers.

That Beacon is able to satisfy the demands of such discerning clients is proof that going Green with your print doesn’t mean a compromise in quality, and nor does it necessarily cost you more. Greener, more waste-conscious printers and paper-makers tend to be more efficient, but there’s plenty of room for improvement, says Owers. ‘If we spend £14bn on print every year, the potential for environmental gain, if best practice is employed, is stunning,’ he adds.

Lauretta Roberts is editor in chief of Print Week

Alan’s bestowal was a characteristic wonder of timing