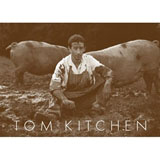 Michelin-star chef Tom Aikens is launching his second restaurant, Tom’s Kitchen, next month with a brand identity and interior design by JP Creative. The consultancy has also designed his first cookbook, Tom Aikens Cooking, which is published this month.

The informal restaurant, located just off London’s Chelsea Green, includes a 90-seat ground floor brassiere, a first floor bar and, most unusually, a games room with pool table, plasma TV, table football and backgammon. Located on 27 Cale Street, the restaurant also has a 25-seat private dining room on the second floor and an area for cooking and wine classes located on the lower level.

JP Creative has designed the signage, menus and internal graphic artwork for the restaurant. Photographer Christian Barnett was commissioned by JP Creative to take pictures of the restaurant’s suppliers, which are hung throughout the interior as well as shown on the menu. The intention is to emphasise where the food being served in the restaurant comes from.

‘The interior has a very clean style and contemporary design, but there is an earthy quality to it. There is a humour and a real informality to the brand,’ says JP Creative creative director Jeannette Pritchard. The new Tom’s Kitchen identity is based on a Futura Light font and is a ‘clean, typographic solution’, she adds.

There is a long-term plan to develop the Tom Aikens brand, which could see additional Tom’s Kitchen venues open and further brand extensions roll out. JP Creative has also designed the website for Tom’s Kitchen, www.tomskitchen.co.uk. The site launches later this year.

Tom Aikens Cooking is designed with a grading system for recipes, which mark out the easy, medium and challenging dishes. There are also images of signature dishes shown as page idents to help with the book’s navigation.

The book is organised by type of food, with sections on vegetables, fish, meat, desserts and baking. JP Creative has art-directed colour photography of the food, which contrasts with black-and-white editorial-style images of Aikens.

‘The book needed to have this Michelin-starred quality about it while also being approachable for complete beginners to cooking,’ says Pritchard. Tom Aikens Cooking is published by Ebury Press.