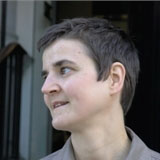 Frau Jenson refuses to be rushed, taking up to a year on her unconventional font designs, which draw inspiration from Germany’s rich typographic history. Wiebke Lang meets up with her to find out more

In Gutenberg’s time, the French typographer Nicholas Jenson developed Jenson Antiqua, a typeface so exemplary that, for five centuries, it has continued to inspire reinterpretations from designers such as William Morris. Ute Harder, the 30-something type designer who works under the pseudonym Frau Jenson in Hamburg, quietly laughs when asked about the nom de plum.

‘A student friend gave me the nickname because Jenson was one of my favourite typefaces,’ she explains, almost apologetically. Glance at her own designs, however, and the affinity to historical typefaces is evident.

Take, for instance, Marathon, a hot metal typeface designed in the 1930s. While still a student at the Hochschule für Angewandte Wissenschaften in Hamburg, Harder began overhauling and digitising the typeface for Linotype. But her latest creation has much earlier origins; Bastyan, a Gothic typeface just released by US font library P22, is based on Gothic calligraphy and lovingly finished off with ligatures and ornaments. When we touch on typographic detail, her reserve disappears and Harder suddenly becomes animated. ‘A typographer friend, who is busy working on the historical Bastarda, inspired me to look at Bastyan. To stress its written character, I created a typeface with outlines that are uneven,’ she explains. ‘Spacing is particularly important with hand-lettering, to preserve legibility.’ 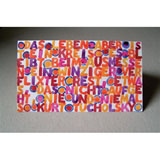 The font Cilati, released by P22 in 2004, has a timeless feeling, despite its traditional calligraphic appearance. ‘Like Bastyan, Cilati came about from drawing. Because my calligraphic skills aren’t particularly good, I simply digitised it,’ she says modestly. She sees her work as craft, not art, and considers carefully the question of what makes a good typeface. ‘For me, it is important that it is beautiful and functions properly. Many digitally created typefaces seem cold and also very similar. I like to draw by hand, but that requires a lot of time. Also, I often just draw without a particular goal, just to get to the essence of a particular typeface. Sometimes new typefaces develop from this,’ she says.

Soon P22 will issue Alpha Roman Pro, a development of Alpha Initials. The decorative script uses drop caps instead of upper case characters, with a calligraphic alphabet as background – a lively reminder of the earliest printed books. It was initially intended as a submission for a design competition, but it was unsuccessful. ‘I wasn’t bothered, I liked it. So I developed it further,’ she says.

While Harder is clearly fascinated by the beauty of early typefaces, her own creations have an individual, contemporary and dynamic character. It is a happy coincidence that Gothic and calligraphic typefaces are experiencing a renaissance. ‘Perhaps it has something to do with flag-waving, and that Germans again dare to look at their traditions,’ she suggests. But following trends is not really what Harder is about. She works meticulously – it takes about a year before a typeface is completed. ‘I take my work seriously. I can’t do it in a hurry, it needs patience and tranquillity,’ she says. ‘Creating fonts is a bit meditative.’

As well as creating typefaces, Harder works as a freelance designer, mainly for Linotype in Frankfurt. Brought up in a small town in northern Germany, she liked drawing as a child, but thought nothing much of it. She trained as a chemist’s assistant, working for pharmaceutical and paper companies. Unhappy with that, she redid her school qualifications, rediscovered her pleasure in doing creative things and began working as a stage designer in Hamburg. In 1994, she studied communication design and illustration, and since then the painstaking craft of typography has been her passion. ‘Every now and again I am asked why I still create new typefaces when so many already exist. But great new songs are still being composed, despite the amount of music already out there,’ she points out. 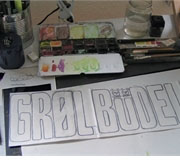 Another typeface currently lies in Harder’s digital coffers. It is not fully matured yet, but it is reminiscent of old poster typefaces for wooden letter-presses. Wood doesn’t only excite her typographically – she is also creating artworks using wood-cuts. She is also determined to market herself better.

‘Sadly, I don’t have the mentality for self-promotion,’ she says. But somehow this Hanseatic reserve goes well with the individuality of Frau Jenson’s typography.