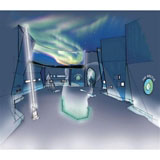 Edinburgh-based visitor centre Our Dynamic Earth has appointed Studio MB to undertake a £200 000 redesign of its Polar Gallery to bring it more in line with current environmental thinking.

Studio MB was appointed to the project following a four-way pitch. It is the first redesign of the gallery to be carried out. The gallery’s revamped design will feature interactive displays showing computer-generated graphics that demonstrate the effect of global warming and how the ice caps are slowly melting away over time. Displays will also show the differences and similarities between the Antarctic and Arctic regions in terms of wildlife, climate and indigenous people.

The £39m Our Dynamic Earth visitor centre, by architect Michael Hopkins and Partners, is built on the former site of the Scottish & Newcastle Brewery and British Gas works. The centre seeks, through its exhibits, to tell the story of the evolution of the planet.

Overall, the intention of the redesign is to create a more immersive visitor experience. For example, a lighting display will show the effects of the Northern Lights phenomenon, with the gallery changing temperature accordingly. A wind machine will also be installed to recreate the effect of ‘wind-chill’ commonly experienced in the region. There will be additional film and sound effects.

‘Both the Antarctic and Arctic regions are extreme and we wanted to get that feeling across, as well as comparing the two. We had to start to talk about how the area is changing as well,’ says David Beresford, a designer at Studio MB.

Last week, a study from the Met Office’s Hadley Centre for Climate Prediction and Research outlined the potential ongoing damage caused by global warming, predicting that extreme drought could affect a third of the planet in the coming century.

The Polar Gallery will relaunch next year. The redesign is being funded by the Scottish Executive.

Studio MB has also been appointed to redesign the exhibition located in the Battle of Bosworth Visitor Centre in Leicestershire (DW 21 September).