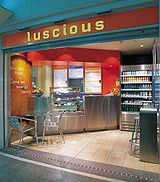 Coffee Republic’s demise is sending ripples through the saturated coffee shop market. High street chains are having to face the fact that me-too corporate design, as far as cappuccino is concerned, is losing its froth. Where a branded coffee shop once bestowed status on a high street now, with bars on nearly every corner, it’s seen as bland and impersonal.

Style-led coffee chains are copy-cats at heart, so designers argue, and that’s proving to be their undoing. It seems too many are stamping a fixed corporate identity on both interiors and product offering, leaving little to distinguish themselves in the market place.

But there’s still money in coffee. And companies like MIX Expresso Gourmet at London’s Victoria Park Plaza are trying to offer something fresh on the menu. Designed by Anderson Norton, MIX has fought against me-too branding by developing a basic interior template that can be adapted to blend in with a branch’s location.

The message to customers is ‘don’t be a me-too coffee drinker’, according to Anderson Norton creative director David Norton, whose ideas for MIX included a constantly changing wall-mounted photomontage of regulars and candid cameras projecting customers’ feet, bodies and faces on a large interior screen.

‘There’s no fixed brand colour. Instead, managers and staff have a palette of colours to play with, so the interior colour combination can vary between branches, giving a sense of individuality to each outlet,’ adds Norton. ‘Big branding doesn’t work in the coffee market because customers want a personal experience that’s attuned to the location.’

Lumsden Design Partnership managing director Callum Lumsden agrees. Forget the cloned corporate palettes, pretentious wall prints and fussy furniture that have come to characterise high street coffee shops. In the 21st century consumers are itching for more traditional street corner cafÃ©s – but without the grease – he says. Apparently, we want bespoke cafÃ©s tailored to local needs, that have the right ingredients to appeal as much to the average housewife in Maidenhead as the go-getting traders in the Square Mile.

Lumsden’s vision is coming alive inside Ainsleys, an independent Leeds baked goods and sandwich chain attempting to appeal to the ‘mobile coffee generation’ (DW 5 September). A new format has been created allowing Ainsleys to exploit the architectural peculiarities of a branch located inside converted railway arches. Lumsden is now urging the chain to consider other ‘architecturally interesting spaces’ to avoid becoming another ‘cookie cutter clone’.

‘Why be a high street me-too? Coffee shops should have individual personality that blends into the environment,’ says Lumsden. ‘There’s no reason why the chains can’t design shops for public libraries, hospitals or even the local police station. But no, coffee chains just want to churn out identical formats for the high street.’

Cost needn’t be a bar to creating a funky, personal interior, says an EasyInternetCafÃ© spokesman. The company aims to create the cheapest possible environment, meaning, in effect, strip lighting, exposed girders and joists instead of fitted ceilings, and cost-effective furniture. Yet its shoestring interiors offer an ambient atmosphere in which customers are happy to log-on and linger.

Lumsden echoes these sentiments. He argues, ‘Why go the trouble of building new ceilings or laying wooden floors if perfectly good interiors already exist. Chains are too precious about ensuring all interiors conform to a rigid corporate identity.’

Diversification is central to EasyInternetCafÃ©’s proposition of maximising turnover on every inch of retail space. As a result style-led interior design takes second place to a wide choice of facilities, says a spokesman.

Although, as EasyInternetCafÃ© recently discovered to its cost, creating an all-singing all-dancing on-line coffee shop, boasting everything from scanners to desk-top cinecameras, falls flat if customer demand just isn’t there. It’s now paring back its offering to basic coffee and cyberspace.

Nevertheless, EasyInternetCafÃ© insists coffee-only chains are foundering because too much over-designed floor space is given to refreshment and seating, but very little else.

‘High street premises come with high rents yet much of the time floor space is underused. There will be peaks at breakfast and mid-morning and that is about it. The trick is to design new streams of revenue,’ according to a spokesman.

Meanwhile, Luscious is surviving in the densely populated market by carving a niche as a health-oriented cafÃ© chain. The 11-strong group has eschewed the traditional Italian or American design concept, popular with British chains, for a distinctly outdoor Australian feel created by Caulder Moore. In addition to serving coffee, Luscious also sells organic groceries.

Predictably the major coffee names still cling to the tried and tested standard identity and interior. But for how long? Coffee Republic’s disappearance from the high street smacks of the old adage: either evolve or die. It’s high time the cappuccino chains woke up and smelt the cafetiÃ¨re.