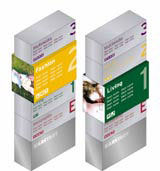 20/20 has presented final concepts for a revamp of signage and customer communication at German department store chain Karstadt, as the company seeks to improve its offer amid sluggish economic conditions.

Karstadt runs 189 stores in Germany, and is described as a middle-market player by Mintel retail analyst Richard Perks. Retail sales in Germany for the first half of 2002 were ‘dire’, according to Perks, who says retailers are ‘shell-shocked’.

Karstadt’s typical store format is based on a six-division layout, including a living segment selling ‘bedsheets to crockery’, a fashion hall stocking ‘children’s shoes to lingerie’, as well as branded lines, a sports department and an accessories section’, explains 20/20 creative partner Constantine Lykiardopoulos.

The problem, he says, is that these offers have ‘meshed into an unrecognisable morass over time’, making it difficult for consumers to make their way around the stores.

The brief to the consultancy, which evolved from a ‘straightforward signage project’, has two main elements, Lykiardopoulos adds – providing a ‘comprehensive navigation system’, ranging from directories to signs for essential services, and developing an ‘in-store communication vehicle to express more emotional qualities about the brand’.

20/20’s solution is visually – as opposed to typographically – led, he says, and makes use of photography to convey brand personality. In effect, Lykiardopoulos says, this involves creating ‘internal mini-identities’ for each department to improve marketing to customers.

Once implementation details are agreed with contractors and Karstadt’s in-house design team, the first evidence of 20/20’s work could be on view by the end of the year at the Rhein-Ruhr-Center store in Mulheim.

20/20 began work in late June, having previously been contracted to another Karstadt brief. The designers on the project were Dan O’Leary and Steve Parkin.