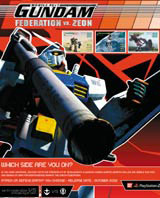 Third Planet is creating print, point-of-sale and merchandising design for the European launch of a computer game spin-off from Japanese toy brand Gundam, in a campaign due to begin at the end of next month.

The Playstation 2 game, designed by Capcom and called Gundam Federation vs Zeon, will be distributed in all major European territories in the run-up to Christmas.

Owned by Bandai, Gundam originated as a cartoon ‘similar to Transformers, with big robots piloted by humans’, says Jon Brooke product manager at Infogrames, the company responsible for the franchise in Europe. Gundam has ‘spawned everything from bedspreads and socks to films and videogames in Japan,’ he adds.

This is the first time the Gundam brand has been applied to a ‘next generation console like PS2’, says Brooke.

The game is being marketed at older teenagers and 20-somethings who use that Platform, as well as to 12to 13-year-olds who comprise the brand’s core audience.

‘The look we’ve gone for is a bit slicker and cooler than the traditional campaign that would appeal to 12-year-old kids,’ Brooke adds. ‘It’s an urban futuristic theme, with strong stylised imagery.’

Four executions of creative work are planned, according to Brooke, including print ads to appear in gaming magazines, along with packaging and T-shirts.

Third Planet designer Matt Naylor says the design derives from the game-play and the shape of the robots. ‘It has a cult appeal, with angular graphics and strong colours, and uses menu-bars and a high-tech feel,’ he adds.

The consultancy won the work last month without a pitch.

You could end up putting something back into design