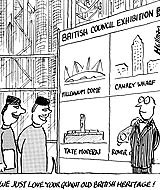 Some of the time the Queen was in Australia, I was in Malaysia. I can’t claim that we were on exactly similar missions – it seems pretty clear, for instance, that I am not the Malaysian head of state, nor have I presided over the complete dismemberment of a global empire – but we were both on propaganda missions. We were both selling the idea of Britishness.

Which is a difficult thing to do, these days. Not for the Queen, obviously – having your head on all the coins and notes of a country does make the task easier, I suspect. But as for the rest of us – what can we possibly talk about? If you don’t know what your own identity is, how can you convey it to others?

I was out in Kuala Lumpur at the invitation of the British Council, which in its post-colonial way works and works at forging a cultural identity for Britain. In the past, it has been accused of pushing the Beefeaters-and-stately-homes image too hard. If that was the case, it’s making amends now, with – among much else – a series of touring exhibitions dealing with contemporary British design.

One such nomadic show, though scarcely the one with the highest profile, is mine – a little exhibition on our Millennium Projects, designed by Studio Myerscough. Or more precisely, our Y2K projects, since not all of them are products of the Millennium Commission. Having waved this show off as it began its international peregrinations about three years ago, I thought that would be the end of it. But no. Every so often I get a call from the British Council, saying that it is about to open in Stockholm, Athens, Milan, or wherever, and would I care to pop over with my carousel of slides and give a lecture, meet the local press, update everyone on progress, and so on. Thus I found myself arriving at Kisho Kurokawa’s Kuala Lumpur International airport, studying my landing card which carried a printed warning in red ink: should I be carrying drugs, I should expect the death penalty. Oh, and have a nice day.

For a place that gained independence in 1957, Malaysia has retained some unexpected Britishisms: driving on the left, for instance, and having our three-pin, 13-amp plug sockets. I discovered that I was a sideshow to the main event: a vast education fair, in which almost every British university and college had literally set out its stall to recruit Malaysian students. There were plenty of takers: around 30 000 putative students passed through the doors in two days. When it came to the questions after my talk, it quickly became apparent that the audience wasn’t much interested in the all-new British projects – after all, to a city that has the world’s tallest towers, a sparkling homage to stainless steel, something as cerebral and tiny as the New Art Gallery in Walsall must seem remarkably small beer. No, what they were interested in were the conservation and regeneration projects. Because, on the Pacific Rim, they don’t do too much of that.

The same question popped up in various places throughout my visit. What could they do to conserve their heritage? How come we were so good at it? What should Kuala Lumpur look like? How to find new uses for the flaky legacy of the 19th and early 20th centuries? There was clearly an undercurrent present here, which soon became apparent: national identity. Malaysia, having gone hell-for-leather for economic growth as a tiger economy – hence the Twin Towers – had then plunged straight into the Asian economic slump, which is only now beginning to lift. So the old, dynamic identity didn’t feel too comfortable to some of them. There seems to be an increasing nostalgia for the past.

The corollary of that is that Britain’s image in Asia is still the retro look: beefeaters and stately homes. For all the Michael Johnson posters and hip exhibitions, that’s how they see us, and right now that looks very desirable from the Asian perspective. So I never answered the question directly because to do so would be to accept that image, while to deny it would be both discourteous and wrong. They’ve got the soaring Petronas Towers; we have the tiddly Canary Wharf. They have Proton Motors; we have (ha-ha) Rover. They have a weak currency that is bringing investment and high-spending tourists racing in; we have – no need to go on. All I could say was: don’t try to turn the clock back. It doesn’t work. But try not to end up looking just like any other world city. It would be too depressing for words.

I left with the strong impression they were expecting something more useful than this handwringing. Sorry all, I wanted to say: I’m British, whatever that means. You got rid of us in 1957. That was a smart move. Don’t expect us to have the answers now.

Hilton Hotels could be losing its marbles

The need is still great for professional design bodies