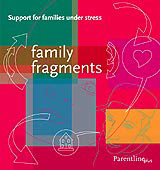 Synergy has branded merged charities Parentline and the National Stepfamily Association under the name ParentlinePlus.

The group was appointed last year following the charity’s search for a design group (DW 7 May 1999).

Home Secretary Jack Straw launched ParentlinePlus this week from the organisation’s offices in London’s Highgate. Synergy managing director Dianne Ceresa says: “The identity and subsequent publications were the result of a thorough research process and continuing dialogue between Synergy and ParentlinePlus. The brand was then developed for the Web.”