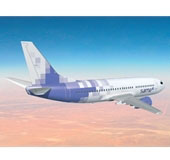 The London consultancy, which also trades as Be, was appointed to the project following a four-way pitch against Landor Associates, Circle Design and Start Creative last October.

Mango Aviation, a consultancy that specialises in starting low-fare airlines, and Investment Enterprises are jointly launching Sama. The first run of flights will take off in June. The airline is expected to open up the Middle-Eastern skies to budget air travel, which has taken off in Europe.

The identity features a geometric design in a blue colour palette and includes a star motif. The identity has been designed in English, as well as Arabic, and will feature throughout the aeroplane, branding both its interior and exterior. It will also be rolled out across affiliated marketing collateral, including digital and printed material.

Chief commercial officer at Sama, Sudeep Ghai, says, ‘We wanted a simple geometric design that was modern and unique to the kingdom. The pixels embody modernity, the colours capture the deep blue of the Arabian skies and our star is the airline soaring over the desert landscape.’

The name Sama was selected following extensive research undertaken by Be with various Saudi Arabian focus groups. The Arabic word has multiple meanings and the identity is intrinsically Arabic, says Joseph Mitchell, co-founder at Be.

‘Of the options we created and researched, Sama was the most successful for its relevance and appeal. It has layers of meaning in Arabic and is very recognisable. Essentially, it means to rise up high, to be elevated, though the name can also be used to refer to the sky and the heavens,’ he explains.

Be was set up in 1999 by ex-Wolff Olins designers Robert Wood and Mitchell. The consultancy, which specialises in developing brand identities for the transport sector, also created an identity for budget airline Duo (DW 10 July 2003), which has since ceased trading.

A marriage of cultures