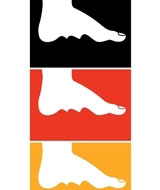 An exhibition of socio-political posters highlights the fact that many of them now seem irrelevant and confusing. Quentin Newark laments their decline, but questions if they still have any place in the public arena

WHAT are socio-political posters? Do they actually exist? Who commissions them? Who displays them? Who sees them? It’s a real mystery. They are meant to tell us something about the world around us, shock us, disturb us, change us, and yet when was the last time any of us saw one in a public place?

Many of the posters collected for The Graphic Imperative, a travelling exhibition organised by Massachusetts College of Art, currently at the Design Centre at Philadelphia University (and on-line at www.thegraphicimperative.org), have no client logo, no dates, no event, no website and sometimes no type at all. I suspect most of them have only ever been pinned to the wall in the designer’s studio, after being self-published. We all know how this kind of thing happens. You have a clever idea – so clever you feel it has to be born so it can impress other people with how clever it is and, maybe, win an award or two or, maybe, get into an exhibition in America. Many of the posters are credited as ‘images’ produced for low-circulation magazines. Only a few are real solutions for clients – announcing campaigns, promoting plays, raising awareness for organisations – and have any chance of being seen by actual members of the public. 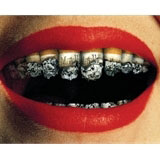 Even if someone manages to catch sight of one of these posters, a new difficulty arises. A surprising number suffer from a kind of shallowness of thinking, a bewildering anti-climax. The initial idea is gripping, but when you think about it further, it leads you down an intellectual cul-de-sac.

Lex Drewinski’s poster for a production of Knut Hamsun’s Hunger is a perfect example. It’s a delicious piece of design – a silver oblong, with the word ‘hunger’ eating into the other words. The main image is of two silhouetted men, one fat with his bloated stomach having been cut out of the other. My guess is that it found its way into this exhibition because the curators thought it was a bitingly ironic comment on world hunger – some are fat, while others starve.

That may be, but the image has nothing to do with Knut Hamsun’s novel, and the play based on it, that it is meant to promote. The novel is an autobiographical study of Hamsun. He is a poor, aspiring writer with barely enough money to eat, growing thinner by the day, who fears suffering death like his sister, who is dying of consumption. He is also mentally starved, living in provincial Norway and longing to go to America. The poster’s design, with the big fat man and the skinny man, both anonymous, communicates not one scrap of this.

The idea of Karmarama’s self-published Make Tea Not War seems to be, ‘Hey, lets make Tony Blair look stupid’. Mocking power is an ancient cliché. It’s like putting a Mohican turf on Winston Churchill’s head or drawing a moustache on the Mona Lisa. But, whereas Marcel Duchamp’s scribble on Leonardo Da Vinci’s painting raised all sorts of ideas about beauty and sexual identity (Duchamp was a transvestite), the thinking behind the tea poster is paper thin. 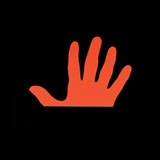 What is the designer saying? That the solution to the oppression of millions of Muslims by the killing squads of the Taliban is as simple as having a cup of tea? Blair is perfectly prepared to have tea, if that would make a difference. It’s Al Qaeda’s suicide bombers and Saddam Hussein’s Baath Party thugs who are unreachable by any form of reasoning, involving tea or anything else. In fact, they are pretty much immune to any form of communication. Sure, let’s have tea with them – we could invite Adolf Hitler, Joseph Stalin, Mao Zedong and Attila the Hun, and talk all of them out of being quite so nasty.

Some posters are so confusing as to be surreal. Lourdes Zolezzi’s self-published Against Violence is a pair of open scissors, making the pubic triangle of a silhouetted woman. The pubic hair is a jumble of typography listing bad things, such as unemployment, abuse, AIDS and abortion. What does this mean? Is she saying the vagina is the source of unemployment? Or is it pubic hair that is bad and dreadful things happen if you don’t cut it off? Obviously Zolezzi thought she was making a poster against all the forms of violence and oppression that women suffer from, but she got caught up in her idea about the scissors and ended up with a poster against barbers.

Are none of the posters good? Do they stand up to being thought about for more than a few seconds? Drewinski’s self-published foot stamping on a face is a variation of the same idea as his Hunger poster – one thing cut out of the other – but this time, in the colours of the German flag, it’s chilling. Gunter Rambow’s slowly-sinking, bloody hand is so stark there is nothing left to take out – it is virtually a logo (and this does have a real client – Amnesty International). 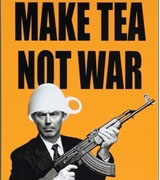 It is a shame that the curators did not cast their net more widely. Many of the posters in the exhibition can be found in the pages of Liz McQuiston’s Graphic Agitation 2, a book bought mainly by designers, full of work created by designers, much of it self-published and largely unseen by those outside of design’s village. There is something odd about this kind of perpetuation.

The streets, the buildings, corridors and lobbies we all inhabit – the public realm – are owned and run, not by us, but by organisations that control what we see. This is a tragic diminution of public debate, but, given the situation, we should accept that the number of real ‘socio-political’ posters is necessarily tiny. We should lament that fact, rather than try and pass off digital run-outs, ‘images’ and self-published pieces as if they are real posters, tested by clients and genuinely part of a public exchange.