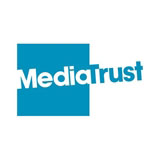 The consultancy was appointed to the project following a five-way pitch, between undisclosed competitors, in September last year and has undertaken the work on a part-commercial fee, part-pro bono basis. A number of sub-brands sit beneath the Media Trust umbrella brand, including: Community Channel, a digital television station; Community Newswire, a free service which helps voluntary groups gain news coverage; and Media Trust Productions, a video and TV production wing of the charity. Form has created a system of brand architecture that takes in each of these divisions.

The primary box logo uses an aqua blue palette – referencing the blue square identity that the charity has used for the past 12 years – with text breaking out from the box in a redesigned typeface that is based on Avant Garde Medium. A ‘box fan’ graphic extension of the logo will be used on communications materials.

‘We presented three completely different routes, some photography-based and some copy-based. The identity couldn’t be too trendy as it would be used for a number of years,’ says Paula Benson, Form partner and creative lead on the project.