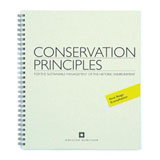 English Heritage is gearing up to launch one of its most significant documents to date on conservation in the UK, with a publication designed by Holmes Wood.

The document, which is expected to be released next spring, will be one of the most comprehensive studies undertaken by the organisation investigating the state of heritage today. It seeks to modernise the approach to conservation by spelling out seven key principles that should underpin standard practice.

The publication aims to refresh existing guidance on conservation, which is now considered outdated. It will also complement the current legislative review being undertaken by the Government, looking at the practice of heritage protection in general.

The final document will be compiled using feedback gathered from responses to two previous ‘work in progress’ publications, which are being sent out to partners and associated bodies of English Heritage, according to a spokeswoman at Holmes Wood. In it, individuals are invited to air their views on the conservation principles outlined in the publication.

To reflect this, Holmes Wood has designed an informal notebook format for the consultation documents, enabling respondents to write down thoughts and suggestions. The publication has a notebook feel and includes visual cues, such as tabs. The spokeswoman at Holmes Wood adds that the spiral bound document is designed to look like a ‘draft’ publication. It is printed on recycled paper.

Holmes Wood is one of ten design consultancies on the English Heritage roster. The organisation held a tender for graphic design services last year, setting up its first formal roster in October. The contract runs for three years.

English Heritage is also poised to launch its revised brand guidelines, developed by Aqueduct, this summer. Aqueduct was appointed to the branding project following a four-way pitch against OpenMind SDS, The Open Agency and ThreeSixZero.

The consultancy will introduce a fresh colour palette as part of the new guidelines (DW 11 August).