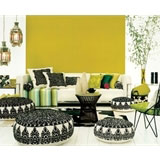 Zara Home will be located on 127-131 Regent Street, in a three-storey building, which takes in 489m2 of retail space.

It will provide inexpensive, designer home furnishings, such as tableware, cutlery, glassware and decorative items, using a supply chain that mimics its sister fashion business, which should enable it to achieve a rapid level of stock rotation. The products will be designed by Zara’s in-house team in Spain, and the retail design of the store is also being handled in-house.

‘The manager will put orders through twice a week and there will be two deliveries each week, so that it is continuously updating its product range,’ says a spokeswoman for Zara Home.

If it succeeds, this will put pressure on established rivals, such as the neighbouring Habitat, which is located at 121-123 Regent Street.

‘It is interesting that Zara is coming into the market. It will put people like Habitat under pressure if they apply the energy and innovation that they have brought to fashion,’ says Tom Lloyd, co-founder of design consultancy Pearson Lloyd.

Zara Home will open this summer. The Inditex-owned company then plans to launch 45 more stores internationally, this year. Meanwhile, Habitat’s Tom Dixon-designed store will open its doors on 28 April.

35 Called in to brand alternative 999 number