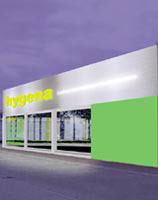 Conran Design Group has redesigned the logo and interiors for domestic furniture store chain, Hygena, which is the European sister of British store, MFI.

The new look will be unveiled in France on 21 December at a new-build store in Colmar near the Swiss/ German border.

Nine new stores are scheduled to open next year in France, with 16 redesigned from existing formats. Some 100 stores will be revamped over the next few years. The work follows the consultancy’s overhaul of MFI’s interiors, which rolled out earlier this year (DW 28 July 2000).

The Hygena facia has been revamped to give it a cleaner, brighter and crisper look and to reflect the new in-store format, Matthews adds.