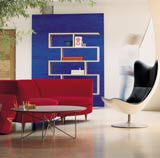 Britain’s furniture industry is on the verge of great things, if James Benfield is to be believed. For too long it has lagged behind other retail sectors, with poorly designed products and uninspiring interiors. But promising changes are afoot in the affordable end of the market.

‘In two years’ time, there will be a huge choice for consumers,’ predicts Benfield, who as Christie-Tyler chief executive dropped Conran a line out of the blue to ask if he would consider designing a range. Conran said it was an ‘intriguing idea’, started sketching there and then and the rest is, brief, history: that exchange was in April 2002, and Content is launched today to consumer press, a month after it was unveiled to the trade.

‘It’s a chicken-and-egg situation at present,’ says Benfield of the furniture sector. ‘Well-designed, affordable furniture is not widely available, so people don’t expect it and don’t go looking for it.’

Content, he hopes, will change all that. It aims to plug a wide gap in the market ‘somewhere between Ikea and B+B Italia’, Benfield says. ‘[In design terms] we’re doing the same as the Italians, Germans and French: simple, well-made furniture from good raw materials, only cheaper.’

Since its launch last month in Birmingham, Content has been requested by many retailers, some even volunteering to dedicate a whole store to the range, as well as unnamed multiples. The range is a big departure for Christie-Tyler, both in design and its big-name collaboration. But Benfield has long seen the benefits in teaming up with well-known names to design and endorse products.

In the mid-1980s, when the term celebrity chef was a contradiction in terms, he collaborated with the likes of the Roux brothers, Michel Blanc and Madhur Jaffrey at M&S for ‘recipe dishes’. Later, M&S worked with fashion designers Jean Muir, Bruce Oldfield and Paul Smith, a tradition that continues today with Julien Macdonald, Betty Jackson and even David Beckham.

Much of Benfield’s flavour for design he learned at M&S, ‘a fantastic education where I learned anything is possible’, and particularly from former design director Brian Godbold. He had a ‘wonderful sense of what’s well designed and what works commercially’ as well as excellent contacts. ‘At M&S, design and quality was a given, it underpinned everything,’ he says.

After food, Benfield ran the fashion business in the 1980s, followed by childrenswear and, in 1993, the home department. The latter two were problem areas. ‘The home sector back then consisted of chintz,’ he says, ‘and there was no-one to turn to for help, no [interior designer] Kelly Hoppen.’

Instead, he recruited a design co-ordinator, Karen Miller, and introduced flat prints, simple fabrics such as Italian chenille and more leather. Looking forward, he sees great things ahead under Radice, ‘a great retailer’.

Even before Content came along, he says he set out to inject a fashion mentality into the furniture ranges, sourcing exclusive fabrics and investing in design technology. Christie-Tyler had static sales and plummeting profits for four years, which Benfield attributes to a lot of brands ‘responding to market changes and retailers’ briefs’ rather than leading from a design footing.

‘Most of our product was middle-road “porridge”, nothing truly contemporary,’ he says. Now, from an output of 20 per cent leather furniture three years ago, half of what Christie-Tyler produces is leather. ‘It suits homes with stripped wooden floors and plain decor,’ Benfield says.

He sensed Christie-Tyler needed a contemporary offering ‘in a hurry’ and contacted Conran, but even he must have been surprised by the speed at which Content was produced. The range is designed to be ‘a step or two ahead of the market, but not too remote from what’s happening now’. Next up are plans to extend the range into more of a lifestyle proposition with home accessories.

‘Content is a catalyst for the rest of the business,’ Benfield says. Indeed, Christie-Tyler’s traditional Duresta range is introducing more leather to its products, and other brands are in discussions with designers and ‘celebrities’.

Earlier, before he’d even taken off his coat, Benfield told me his take on wine. Not for him New World vintages, because he’s barely scratched the surface of what France and Italy can offer. I try to seek an analogy with furniture and come up with this: surround yourself with quality because, in essence, life’s too short. I hope he agrees with that interpretation.

Non-executive chairman of Confetti, a wedding products and service provider

1970-1999 Director at Marks & Spencer, including seven years on the board. Job included specific responsibility for the development of the home business

The Hub creates identity for festival