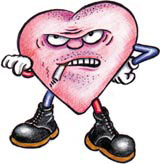 Like so many good things, the A&D Gallery started ‘in a drunken stupor’. So says Daniel Brant of the central London gallery he co-founded with self-styled Andie Airfix just over two years ago. Since then the duo has developed a repertoire that has grown from Airfix’s own work to include the likes of living legends Duggie Fields and Andrew Logan.

While the ‘A’ and ‘D’ of the gallery’s name are derived from the founders’ first names, they could just as easily stand for art and design. Both Airfix and Brant are designers, though not trained as such, running their own separate businesses now, but who met years ago when the former went to work with the latter. The ‘and’ in the title is provided by Helen Clarkson, says Brant, described as Cannonus Fodderus on her business card. She came from fashion to join his consultancy as an administrator and now helps run both the company and the gallery.

Brant says the reason behind the gallery was ‘to find out what art is’. Having realised that work is more interesting than just fulfilling the clients’ needs, he and Airfix decided the only way to exploit that was to run their own projects and they do that working closely with their artists.

For last year’s show of Fields and Logan, for example, they commissioned a huge collaborative piece, a blue mirrored cross embellished with figures of Snow White, Mickey Mouse and others, bringing the two together in their art for the first time. It is now on sale for £11 000. Similarly, they persuaded Logan, best known for his glass sculptures and portraits, to show his sketches from around the world. And now they have enticed 70 artists to submit Valentine’s Day cards drawn or painted on portrait-format paper for their current show.

Clarkson stresses the return to traditional craft skills for this project. And the way it’s been dealt with, talking artists through the process, appears typical of the nurturing she sees as part of the gallery’s role.

Brant puts it as ‘acting as an interpreter between the artist and the real world’, in ways such as helping them with computer failures or understanding printing processes for limited editions. This spirit of collaboration has also led to a link-up with Off the Wall, the company set up by architect Michael Dowd to put art on to standalone curved screens.

The A&D Gallery was born in much the same way that Brant fell into design. ‘I wanted to be [Ettore] Sottsass in paper and ink,’ he says, citing Jean-Paul Gaultier’s ‘look’ for Grace Jones as another influence. In fact, he set up initially doing new business for designers in the 1980s and, having procured too much work for the designers on his books to handle, he started doing design himself. That’s where Airfix came in to work on projects such as the Symphonic Fantasy brochure for Disney, promoting the Walt Disney movies.

In the gallery’s basement, Brant now runs Graphic Entertainments, which handles graphics work for clients ranging from ballet to a ‘glamour model’ agency, but generally in the arts. Airfix, meanwhile, is ‘in rock ‘n’ roll’ with his company Satori, with album covers and promotions for the likes of Led Zeppelin and Metallica to his credit.

‘I work more in the arts, bringing my pop sensibilities to it,’ says Brant. ‘Andie’s the reverse.’

The two do agree, though, on animation, of which they are great fans. ‘We’re frustrated artists, with an approach that is illustrative rather than architectural,’ says Brant. Both are also keen on ‘distressed’ images – Brant citing Robert Rauschenberg and Terry Jones’ work for Fiorucci as inspirations – and being ‘fond’ of the work of David Hockney. ‘I like “outsider” art [by people untrained in the medium they’re using],’ says Brant.

Though it thrives, with a regular change of shows and events such as an auction, a raffle, an Elvis night and so on to stimulate interest, the gallery is hardly a cash cow. ‘A lot of shows haven’t made money or broken even,’ Brant admits. A commitment to ‘affordable’ art has something to do with this, with pieces on sale for as little as £75, and a policy of making the gallery as friendly as possible to encourage people in. Having a ‘fantastic’ landlord for the 15-year lease and two busy consultancies helps tide them over, but Brant says they’re about to start going to art fairs to make it better known.

As for the artists, there is the odd sale, but ‘all we can guarantee is a line on the CV with a West End gallery’, says Brant.

Brant and Airfix have shown through A&D that designers can be entrepreneurial and cross over into art – ‘as long as you give up the idea of ever having money,’ says Brant.

The exhibition Valentine’s Day Mascara is on until 14 February at A&D Gallery, 51 Chiltern Street, London W1