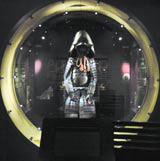 The fruit of Event Communications’ 18 month-long project at Blackburn Museum, involving the redesign of three of its main galleries, was unveiled last Friday.

The consultancy’s displays focus on the ‘rich and surprising’ object collections at the museum, which is housed in an existing Victorian building, says Event project manager Kirsty Brackenridge.

The Social History Gallery focuses on the people of Blackburn and is dominated by a curving, aquarium-style showcase, with some objects breaking through the glass. The group also commissioned artist Lucy Casson to create sculptured characters to bring the collections to life.

The Hart gallery provides a showcase for Blackburn’s collection of religious icons, rare coins, manuscripts and Japanese prints. (Japanese armour pictured). Event has used ‘symmetry and bold colour’ in the space, with the prints against a yellow backdrop and the manuscripts against purple.

It has also created vertical lines to highlight the height of the gallery, Brackenridge adds.

A mezzanine above the Hart Gallery has been transformed into an Explorer’s Gallery, aimed at children. It displays unusual objects from four continents brought back by local Blackburn people and features interactive displays such as a spinning globe and a Victorian camera.

Following its appointment in June 2001, Event’s creative work was used as a funding bid document for the Heritage Lottery Fund, says Brackenridge.