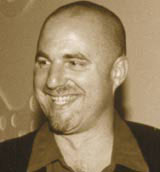 Robbie Laughton, Wolff Olins’ high-profile creative director, is to lead a four-man breakaway from the group at the end of this month, Design Week can exclusively reveal.

Designers Dan Rowe and Paul Shriever are leaving with Laughton, as well as strategy consultant Dan Bobby. The new consultancy will be up and running at the beginning of March, says Laughton. A name ‘hasn’t been settled on’, though some undisclosed clients have expressed interest in the fledgling business, he says.

Laughton has been with Wolff Olins for more than a decade. His departure leaves two creative directors, Lee Coomber and Keshen Teo, at the helm. Wolff Olins is looking at ‘a number of options’ to replace Laughton, says a spokeswoman.

‘We were already looking to recruit [before Laughton gave his notice],’ she adds. ‘But there are some strong talents within the business [too].’

Industry sources have mooted a possible merger between Wolff Olins and Omnicom stablemate Interbrand, but Laughton quashes this speculation. ‘I sit on the board and I should know. Such a discussion has never taken place,’ he maintains.

His motivation for leaving is to experience a ‘smaller scale’ environment, with ‘the buzz of working at the heart of projects’, he adds.

Laughton’s recent clients at Wolff Olins have included Go, Channel 5, Reuters and the Unilever BestFoods offshoot Rocket. He says the breakaway will ‘focus deeper into communication and branding as the base of where we’ve come from’, adding that ‘creative ideas’ have been his stock-in-trade.

Pressed on whether the group will get involved with brand experience issues, Laughton says he will be working ‘internally and externally’ with clients.