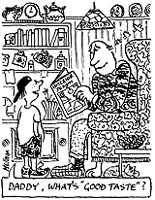 The last Christmas of the last Millennium was also the first in which our children grappled with the concept of taste. An amusing enough exercise, from the adults’ point of view, though wholly unexpected. Children? Taste? Surely those two words are mutually exclusive? Is it not the case that, when children arrive, any notion of a tasteful lifestyle vanishes? But they are growing up. As with the need to explain the mechanics of human coitus, it was time to explain – or dodge – another, still more mysterious, fact of life.

It came about with the dressing of the Christmas tree. Somehow, one or other of us let slip that, in an earlier time before children, we’d had a tree every year – as child-free adults we had acknowledged Christmas, yes, and wrapped up presents for various people, including ourselves – but the Christmas tree had been dressed differently.

This intrigued the children. How was it different? Did it not have lights? Did it not have shiny, dangly things? Yes, indeed, we replied, but in those far-off days the lights were all white rather than coloured, and did not flash on and off. Moreover, the shiny, dangly bits were comparatively few, and of clear glass – we found a hand-blown survivor in the box to show them – and anything at the top of the tree would have been moderately ironic, but again not brightly coloured. As for tinsel – pah!

Thankfully, they didn’t go off on the irony tangent – my synapses may have fused with the effort if they had. But the idea of a tasteful Christmas tree intrigued them, and they wouldn’t drop the subject. So this taste business was a grown-up thing, then?

We were straight on to dangerous ground. Well, you’re always on dangerous ground with matters of taste, which is why nobody has yet succeeded in pinning the subject down successfully in book or exhibition, though several have tried. Kitsch, you can recognise easily enough. But bad taste/ good taste? Immediately, you’re in the marshlands of design snobbery, where all pronouncements are deeply subjective, and are anyway generally governed by fashion rather than eternal truth or beauty. Besides, this was no time to come out with the Adolf Loos dictum that ornament is crime. If ornament is crime, then Christmas is crime. Which is true, as it happens, but we reckoned the children weren’t quite ready for that. Santa Claus a master criminal? Let’s not go down there. Or rather, blame Prince Albert instead.

So we hummed and we hawed. We have never tried particularly hard to impose particular notions of taste on our children. Indeed, as the Christmas tree business demonstrates, to some extent children have imposed their notions of taste on us. We do not live designed lives, in the Wallpaper/ Elle Deco/ World of Interiors way. Come to that, we do not always follow the William Morris dictum of having nothing in our house which we do not know to be useful or believe to be beautiful. We have some regrettable mugs in our cupboards, some of them chipped. There is the occasional useless, ugly, sentimental object to be found around the place. There is a hideous old chair that fits in nowhere, but which hangs about only because some family member donated it years ago. There is far too much clutter. How can we possibly talk to our children about taste? Are we not hypocrites?

We can’t help noticing, however – since these days the children oversee the dressing of the Christmas tree, and increasingly the buying of things to go on it – that year by year it is becoming, well, more tasteful. OK, these things are relative, but let’s just say the older ones are now interested in the fact that not all folk like flashing coloured lights. We refrain from telling them that it was in a mood of irony that we replaced the old white ones with the coloured flashing ones. That this apparent relapse was a purely snob response to the fact that tasteful white ones had become ubiquitous even at Homebase. No, let them work it out.

The matter was mentally filed away by the children. But as usual with our younger, seven-year-old son, it resurfaced again a few days later after a fruitful spell in the subconscious. He wanted to know more about good and bad taste. I prevaricated. He insisted. But my answers weren’t sufficiently clear-cut for him. Eventually, he found two objects and presented them to me. The first was a 1970s Penguin Classic paperback of Plato’s Symposium. Was this good taste, he asked? Might be, I replied cautiously. Then he produced a garish pack of Rowntrees Tooty Frooties. Was this bad taste, he demanded?

I uttered, “It’s not that simple.” But then I caved in. Yes, I said, yes. That first one is good taste, the second one is bad. And I’ve felt guilty ever since.