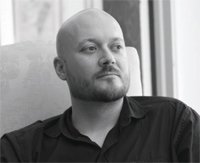 The Keystone Design Union is a mould-breaking consultancy. Founded in 2003 by then-creative director of Jay-Z’s record label Roc-A-Fella Records David Gensler, today the New York-based group boasts a ’global collective’ of 1250 creatives in 98 countries, and a private equity arm portfolio of about ten design-based businesses.

The KDU’s client list includes LVMH, Adidas, Nike and a raft of fashion and youth culture brands for which it designs products, branding, retail environments, magazines, marketing and advertising campaigns. It has just rebranded rock group Linkin Park, and recently developed a retail campaign for Virgin UK broadband. One of its biggest projects has been developing clothing, accessories, footwear, packaging and graphics for the Chinese Olympic team. ’We can execute pretty much anything except architecture,’ says Gensler.

’Our premise is that we want to work with the best and most respected talents in the world, but the traditional consultancy model would mean hiring them and putting them at a desk, which I just don’t have the money for,’ says Gensler. ’That’s why we developed this system, whereby we unite people under The KDU flag of creativity, building teams of the best people from all over the world for each project.’

To get to know new members of the network, The KDU constructs teams that often consist of members from several different continents and then tests them out on non-client briefs.

’At the start, especially, we spent a long time working on self-set projects, mixing and matching different personalities and talents – seeing, say, how a British illustrator works with a Malaysian creative director, a Hong Kong-based typographer and a Los Angeles-based photographer,’ says Gensler. ’There are some personality combinations that just don’t work no matter what, of course.’

Over the course of about two years, the core Brooklyn team, which now consists of 20 staff, tested out various business models. Gensler is keen to distance The KDU from the increasingly popular design procurement method crowd-sourcing, in which briefs are posted online and the best proposal wins. ’There is no real quality control in that model, as you don’t have an intimate relationship with the people creating the work,’ says Gensler. ’We only let people loose on a client brief once we know whether they are easy to work with, how long they take to develop their artwork, and so on.’

The consultancy’s first formal client was Blacksmith, owned by hip-hop star Talib Kweli, for which it developed a magazine Gensler claims took 45 creatives just a week to create from scratch. ’More often than not, we will have people working in different time zones around the clock,’ he says. While time-efficient, this arrangement has a negative impact on Gensler’s sleep patterns. ’I am like a surgeon, always on call no matter what time of day it is,’ he says.

One big recent development for The KDU is its takeover by a ’major US media company’. After seven years as a wild pony, The KDU is joining a stable of many other design, marketing and advertising companies. Gensler expects the move to allow The KDU to take on more new projects and to invest in more businesses.

The KDU’s portfolio of investments includes fashion brand SVSV and bicycle brand Brooklyn Machine Works. ’We are helping Brooklyn Machine Works to accelerate from a planning standpoint and we are also doing some new product development for it,’ says Gensler.
He adds, ’It is good to own equity in things you believe in. As a designer, you are always bringing up other people’s children, so it is refreshing to get a share of the profits that you are helping to generate. This diversifies our revenue sources, but also, creatively, investing keeps us on our toes, as we are our own client.’

Another string to The KDU’s bow is its non-commercial creative network, which has waxed and waned over the years, but is revving up again. It produces a magazine called The Solstice, which Gensler describes as ’a no-holds-barred creative exercise with no commercial imperative, that keeps the network tightly knit’.

’At the end of the day, we put on a good professional show for the clients, but really we are just a bunch of smart-arsed pirates with an anarchist streak who want to overthrow the system. This means aiming the gun at ourselves,’ says Gensler.