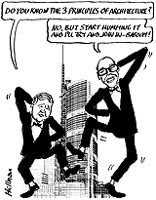 Television is the Holy Grail of anyone involved in the design business. There used to be no TV programmes on design, architecture or engineering. Unless you count those strange, washed out offerings found on the Open University. No, mainstream TV was just not interested. All that has now changed.

To be more specific, TV was not interested for most of the 1970s and 1980s. In the black and white era, architecture (though not design) did well out of the BBC, what with the Monitor arts strand, Betjeman’s regular doses of nostalgia, and the bibulous Ian Nairn’s various series. Nairn, with his open-top Morris Minor, unsteady gait and frequently slurred speech, more or less invented the character who has been the curse of the box ever since: the quirky-eccentric TV presenter who looms larger than his subject. Betjeman was a TV natural. Without the two of them, there could have been no Lucinda Lambton or Jonathan Meades, let alone Laurence Llewellyn-Bowen. But that stuff is no more about design than Two Fat Ladies was about cooking.

The trouble is, when anyone tries presenting the subject seriously, we tend to yawn and nod off. Betjeman’s great rival Nikolaus Pevsner knew infinitely more about architecture, design and art than the teddy-bear poet laureate – but he had the TV presence of a filing cabinet.

The now defunct BBC Design Awards suffered over-worthiness, despite the attempts of successive presenters – from Christopher Frayling to Muriel Gray – to inject life into it. How do you compare a clockwork radio with a reservoir? The answer was, don’t bother to try. At least the also defunct, highly pretentious Late Show took a lively approach. I remember them constructing an entire set out of rare oriental carpets just so I could do a five-minute item on an obscure Egyptian architect about whom I knew little. It was decadent, but fun while it lasted.

Right now there is a rash of programmes being made about architecture, and rather fewer being made about design – home and garden makeovers excepted. This reflects the relative standing of the two disciplines: architecture is oh so fashionable, thanks to things like the Tate Modern, and design, despite the Dyson effect, is lagging behind. As Ron Arad observes, architecture gets the full culture-pages treatment in the broadsheets, while design is generally handed to the fluffheads of the homes and gardens sections. The same is true of TV. But at least we have another Better by Design series by Seymour Powell starting on 18 July (see Review, page 44).

Now this is interesting. The two Dicks, Seymour and Powell, are in TV terms a comedy double-act – funny guy, straight guy. Slightly different from the competitively eccentric Two Fat Ladies. As with cookery programmes, the process is as important as the end product. And the process of designing a product makes infinitely better TV than the process of designing a building. We all remember the great bra-redesign programme. It’s worth reiterating why these programmes are better than home makeover shows: it’s because they deal with fundamentals, not cosmetics. Seymour and Powell weren’t interested in lacy bits. If they were, they didn’t show it.

The strange thing is, these slightly off-the-wall programmes are old-fashioned public service broadcasting, cleverly disguised. They are commissioned by the Design Council. As such they belong in a TV tradition rooted in those black-and-white moments where white coated boffins smoking pipes point at models of nuclear power stations. Luckily Seymour and Powell transcend the limitations of the genre. Mostly by being both talented, and genuinely interested in what they’re doing. I’m still waiting for the TV programme on architecture that has a similar impact.

No doubt we can look forward to a lot more programmes on architecture where determinedly eccentric solo presenters do a lot of walking shots in front of interesting faÃ§ades: necessitating much use of the wide-angle and zoom facility. Meanwhile, Seymour and Powell will be getting out their spanners and tackling the unsteerable supermarket trolley. I would love to see the ratings for these programmes, but I’m prepared to bet that while architecture tends to win out in the newspapers, it is design – despite having much less air time – that wins through on the box. If so, it may be because the design process makes better telly than the architectural product.

Or it may be that, so far, a telegenic architectural double-act equivalent to Seymour and Powell has yet to be discovered. Suggestions on a postcard, please.