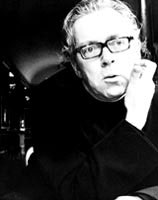 It’s not hard to see why Bob Crowley is one of the most sought-after theatre designers in the business, with his soft, understated Irish charm on the one hand, and a steely professionalism on the other.

At any one time he has enough projects in hand to keep him busy for a couple of years, despite his freelance status.

Crowley spent most of the 1980s at the Royal Shakespeare Company in Stratford-upon-Avon – he and director Adrian Noble started out at the Bristol Old Vic – working on such milestone shows as Les Liaisons Dangereuses and The Plantagenets.

The 1990s saw him ensconced at London’s National Theatre under Richard Eyre, where he designed Carousel and Racing Demon, among others. Singer/ songwriter Paul Simon saw Carousel on Broadway and invited Crowley to design his $8m (£5m) musical, The Capeman, which subsequently flopped.

Disney wanted him for The Lion King, but he declined, knowing that director Julie Taymor already had a very particular idea of how she wanted the show to look. Instead, he agreed to re-vamp the Elton John/ Tim Rice version of Aida for Disney and that is now one of the hottest tickets on New York’s Broadway.

Back in London, he is currently engaged on two very different shows – Orpheus Descending at the Donmar Warehouse, and The Witches of Eastwick, the £4.5m Cameron Mackintosh musical at the Theatre Royal in Drury Lane.

“I need the small shows as much as the big ones,” says the designer as we chat in the Theatre Royal stalls, surveying one of his sets for Witches. “I couldn’t keep doing big shows all the time… they take over your life.”

What first sparked the young Bob Crowley’s interest in stage design was Sean Kenny’s revolutionary set for the musical Oliver!, which he saw at the Cork Opera House at the age of 12. “It had been all backdrops and painted scenery up to then, and I was suddenly given a glimpse of a whole other world of stage design, a world where the lights and the walls of the theatre were exposed and made to serve the design. It was an eye-opener.”

Kenny’s ingenuity taught him early on that it’s not enough to be good; the key to success was being special.

Two things determine that special something from the outset – the play and the director. In Crowley’s case there have been surprisingly few directors, since he has chosen to work exclusively with a handful of top names.

“I found some directors had a puritan streak when it came to design, so I tended to stick with those who got their rocks off on how a show looked as well as how it sounded. Each director tends to engage a certain facet of your work. There’s no point working with a director who doesn’t trust you or isn’t interested in design.”

The facet of Bob Crowley’s work engaged by The Witches of Eastwick (directed by Eric Schaeffer), which is already previewing, is his flair for illusion. “It’s been a book and a film already, so I wanted to give it a completely new look. I didn’t want to simply ape the technical wizardry of the film. To achieve this I enlisted the help of an illusionist called Paul Kieve.”

Between them, Crowley and Kieve have worked out ways to make a New England church collapse in a heap of rubble, elevate an enormous bed to the gods, and launch the four leading players into the upper reaches of the auditorium.

“Cameron (Mackintosh, the producer) calls the show ‘Peter Pan for adults’. We’ve installed a tracking system on to the ceiling of the Theatre Royal, so the actors can fly right round the auditorium,” says Crowley.

Considering the £4.5 million budget and the complicated nature of the show, Crowley seems remarkably calm about the whole thing, though he does permit himself a little gasp of horror at one point in the conversation, “I can’t believe we’re opening this show in a week!”

Perhaps after the scale of The Capeman – budget of £5 million, cast of 45, story spanning three decades – followed by its cruelly premature demise, anything seems manageable.

“It had a terrific Latin-American score, but there were problems with the book and the press were out to get Paul Simon. I never expected them to be quite so vicious. He was crucified. I’m sure it’ll be reinvented one day, but let’s hope it’s not on Broadway,” says Crowley.

Neither was the press kind to Aida, but Crowley is confident that it’s critic-proof. “It’s not traditional music theatre by any means, it’s a big, commercial, rock ‘n’ roll show. You don’t go along to a show written by John and Rice expecting Stephen Sondheim,” he says.

Though based on Verdi’s opera, Crowley says it has a contemporary feel to it. “It’s basically a big red box, with pivoting walls and lots of translucent backdrops and silhouettes. There’s a vertical swimming pool. It’s very colourful, the kind of thing I might have done for the Royal Shakespeare Company a few years back.

“Contrary to what everyone seemed to think, I didn’t have an open chequebook on Aida, just the $2m (£1.3m). Disney is serious about its stage shows, and the thinking has changed a lot since Beauty and the Beast.

“Disney has brought in a couple of guys who cut their teeth in the theatre and it decided that doing stage shows that aped the cartoons was not a good idea. After The Lion King, it is very keen to create theatrical events that have nothing to do with the films in visual terms. The Disney name comes with a lot of baggage, but I didn’t have any problems with them. They trusted me to get on with the job,” he says.

Two years ago, Crowley accepted an invitation from top director Nick Hytner, one of his most favoured collaborators, to design the costumes for his film adaptation of The Crucible, which meant four months in Massachusetts and a break from his punishing theatre schedule. Didn’t it whet his appetite for further design work in the movies?

“Not really. Film design isn’t that interesting to me because it deals with reality and naturalism, and what I love about the theatre is that you can create other kinds of reality. The designer more or less has to relinquish control on a film, and I suppose I enjoy that control,” he says.

The coming year will see Crowley working on two further projects with Nick Hytner – a new musical version of the classic 1950s film The Sweet Smell of Success, and Verdi’s Falstaff at the Metropolitan Opera, New York.

The Witches of Eastwick is currently previewing at the Theatre Royal, Drury Lane, and Aida is expected to open in London next year. Orpheus Descending is at the Donmar Warehouse until 19 August.