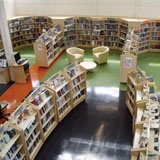 Austere libraries are becoming a thing of the past, with many reinventing themselves to offer a full lifestyle experience, says Liz Bury

With libraries now offering a range of different services from book-lending to DVD rental and on-line access, they are developing a new image for the 21st century. The days of the ‘Dickensian, book-lined study, where you can hear the grandfather clock ticking in the corner’ are numbered, says Tony Coffield, interiors specialist at creative agency Curious Oranj. ‘It’s now more in line with where the public would go for a book – more like Waterstone’s,’ he adds.

Les Watson, pro-vice-chancellor of Glasgow Caledonian University, which this year opened its ground-breaking Saltire Centre, a one-stop shop for library, learning and student services, says, ‘It’s about the third place: a place that’s not work and not home, but is essential to your lifestyle. Like HMV or Top Shop.’

Likewise, the London Borough of Tower Hamlets has adopted a retail-style design for its library services. Tower Hamlets engaged brand and design consultancy Bisset Adams, which previously worked with retail clients including Bagel Street and Australian clothing label Bitchinslacks, to develop its brand.

Idea Store, the library, learning and information brand, was born in a prototype branch in Bow in 2002, followed by Chrisp Street, the award-winning Whitechapel flagship by Adjaye Associates, and Canary Wharf, with more branches still to come. Idea Store programme director Heather Mills says, ‘We have fully developed brand guidelines which cover values, signage and environment, furnishings and exteriors.’ David Adjaye condemns the quality of library design generally. ‘The quality has fallen so far behind that even a Tesco looked nicer. I used retail as a benchmark. The library had to be as easy to navigate as a shopping centre. It had to be contemporary and equivalent to a retailer in standards,’ he says.

At the Saltire Centre, design is based on the concept of ‘conversational learning’, says Watson. ‘I believe that learning starts with dialogue, so our challenge was, “How do you create a place suitable for conversational learning, as well as offering space for individual monastic study and for browsing books?”‘ The answer is with clever, humorous and people-centred design.

Coffield, who worked with Watson on the Saltire Centre and advised Kent and Newquay libraries on their design as part of the recent nationwide Love Libraries project, believes that libraries need discrete areas for different users. ‘Space planning is the key. The design needs to acknowledge what is going on in a space – this has changed within libraries in recent years,’ he says.

Noise control is especially crucial to library design. ‘One thing I noticed in other modern university libraries was how they channelled noise up the stairwell,’ Watson says. ‘We wanted conversational group work, but silence too.’

‘We also used the psychology of colour to influence behaviour,’ Watson says. A bright, excitable colour palette, used downstairs, becomes cooler higher up the building, where study becomes quieter and calmer. Specially-commissioned graphic artwork on each floor also reinforces the intended atmosphere on each level, with a bustling cityscape on the ground floor, moving through maps and geography on first, a domestic garden on second, and up to a pale blue, domestic, interior-style palette at the top, where study is silent. 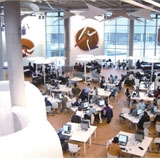 Audio signage takes this a step further: a giggly child says ‘sshh’ on leaving the lift at the ground floor, while Watson’s own authoritative baritone calls ‘fourth floor’ at the top. ‘It’s good fun. If you use this building every day of your life, you will never get bored,’ Watson says. Even the back of the toilet doors have something to keep users occupied, like quick lessons in how to be a DJ, how to find water in the desert or how to sign the alphabet.

The idea of libraries as places that provide a lifestyle experience – and not just as providers of goods and services – is at the heart of their new design.

Brighton and Hove’s new Jubilee Library has a glass wall that runs the entire length of the building, breaking down barriers between the square outside and people reading newspapers and browsing books inside. Books can be displayed in promotions reminiscent of a retail environment, rather than just being shelved in the traditional way, according to the Dewey Decimal system.

While such high profile, expensive projects are the exception, rather than the rule in public library services, they are creating a blueprint for library design for the future.

The Jubilee Library is the centrepiece of the newly reinstated Jubilee Street area in Brighton. McMahon says, ‘We are at the heart of what has become Brighton’s cultural quarter. I don’t want to sound pretentious, but this is about café culture, retail culture and a modern interpretation of our culture.’

• £4.5m building at the heart of Peckham next door to Peckham Pulse leisure centre