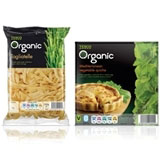 Tesco is poised to relaunch its entire Organic own-label range with a redesign by Coley Porter Bell. It is the first work to be unveiled by the consultancy since its appointment to the Tesco design roster in May.

The redesign is applied across 400 lines, including 50 new product categories, such as Tesco’s first Organic cotton range, which comprises cloths, towels and sheets. The first products featuring the redesign will launch on 17 July.

The design is based on a visual code and features photography of nature to signify different food categories. Images of grass denote dairy and meat products, wheat represents bakery products and mixed leaves are for fruit or vegetables.

The images are placed against a black background to create shelf stand-out, as the Organic range will now be sold using a revised merchandising system. This will see the products retailed among other produce, rather than in a dedicated section. The tree motif in the logo has been retained, but a fresh logotype has been applied. Pemberton & Whitefoord designed the previous Organic range (DW 25 March 2004).

‘The idea was to create a shorthand symbol that would represent organic and healthy associations. We wanted to create a strong design architecture that could be flexible according to seasons,’ says Adam Ellis, design director at Coley Porter Bell.

The move to redesign the Organic range comes as Tesco looks to build up its various product categories and own-label ranges (DW 18 May). Haines McGregor is revamping Tesco’s range of dried fruit and is working on five other design-led projects for the retailer, confirms a spokeswoman for the consultancy.

Haines McGregor was appointed to Tesco’s design roster at the same time as Coley Porter Bell, in a review overseen by Jeremy Lindley, head of design at Tesco. This year, Tesco also added 200 lines to its Pentagram-designed Finest category and more than 100 Healthy Living products, including a Kids Healthy range.

Separately, Tesco has announced plans to revamp its Express shopfronts with a raft of more bespoke designs featuring a reconfigured retail identity created by architect Aukett Tytherleigh. The facia is rendered in white against a dark blue, rather than the traditional Tesco red and blue. The

intention is to make Express stores blend into their local communities. Only the letter characters will be illuminated at night. Tesco will not apply this redesign to its other portfolio of stores, confirms a Tesco spokeswoman.

Is design really under threat from the ad agency?