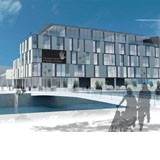 James Dyson’s plans to open a £22m design and engineering school in Bath could be extended to other countries, the inventor and designer has revealed to Design Week.

Dyson is to provide £12.5m towards the opening of the state school for 14- to 18-year-olds and is interested in setting up similar establishments in other countries in the West. ‘I would be quite keen to do this overseas, perhaps in the US. A lot of Western countries haven’t quite got the importance of engineering and [in the UK] we are not producing enough ideas or engineers,’ he says.

In what he claims is the first of its kind in the UK, the Dyson School of Design Innovation will open in 2008, under a proposed sustainable building design by Wilkinson Eyre Architects. Dyson says he has spent five years developing the idea, driven largely by the threat of growing design and innovation skills in the Far East.

Educational charity the James Dyson Foundation is providing the bulk of the start-up costs, although taxpayers will pick up the rest: £6m from the Learning and Skills Council and £5m from the Department for Education and Skills. Running costs will be met by the state, but the school is a private/public initiative, with corporations including Airbus, Rolls-Royce and Williams F1 already on board.

About 2500 students will be offered a specialist diploma in engineering. Dyson hopes the school will lead to the formation of similar establishments around the UK.