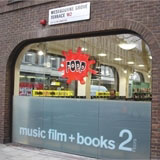 Fopp, the music and book chain retailer, is planning to open its biggest ever store on London’s Tottenham Court Road at the end of July.

All the design aspects of the retail space are being handled in-house by Fopp, as is the marketing for the launch.

Housed in the former store of furniture and home accessories retailer Purves & Purves, the shop will be spread over 1860m2 on two floors at its central London location.

The ground floor of the shop will feature a range of specialist music as well as albums from the Fopp chart. In the basement, shoppers will be able to browse books and DVDs, or use the Fopp café.

Fopp has applied for a beverage license to sell alcohol on the premises, which is still thought to be under consideration by Camden Council.

Fopp began life as a market stall in Glasgow in 1981, and founder Gordon Montgomery opened his second shop in Edinburgh’s Cockburn Street in 1987. More than 20 years later, there are 25 stores across the UK – four of which are in London.

Fopp recently also redesigned its on-line store in-house. It can be accessed at www.fopp.co.uk.