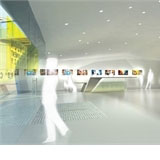 IDSR has unveiled a futuristic interior design for the London Development Agency’s headquarters, which will be located at the Palestra building in Southwark, built by architect SMC Alsop.

The design is a flexible, open-plan scheme that works across two floors. It features bespoke graphics and different zones to create a varied and unusual working space for the LDA. IDSR, Sheppard Robson’s interiors group, was appointed to the project last October.

The entranceway, which features a pod-like structure, uses an ‘organic’ interior design ‘where the floor wraps around and up to create the ceiling,’ says Simon Flint, associate partner at IDSR.

The pod will host exhibitions and house a ‘sculptural seating’ scheme. A pink ribbon motif has been applied to define the plasma screens and different information zones in the pod. ‘We wanted to create an office with maximum impact, but with quite a minimal design,’ adds Flint.

IDSR has also applied contrasting design features to the office interior walls. An image of the London skyline has been rendered in a dot matrix design and a series of water graphics has been applied to make reference to the River Thames. In addition, a map of London doubles up as a display to showcase the events taking place across the capital.

The office space will house the architecture and urban design unit that is being set up by the Greater London Authority. Called Design for London, the unit will merge the GLA’s Architecture and Urbanism Unit with the LDA’s design team and the urban design staff from Transport for London (DW 29 June).

LDA staff are relocating from their existing offices at St Katherine’s Dock in London. The Palestra building is due to be completed later this autumn.