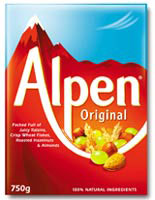 Jones Knowles Ritchie has redesigned the packaging for Weetabix to emphasise its ‘iconic visual equity’ and will extend this look to product variants Minibix and Weetabix Crrrunch, which are to be rebranded Weetabix Mini Crunch from this week.

The work flows from Weetabix’s strategic reappraisal of its portfolio, which focused on how to use its ‘brand fame’ most effectively to define the relationship between the parent brand and its spin-offs.

The design involves ‘stripping the pack of its extraneous elements to maximise its core characteristics and crafting the identity around the yellow lozenge and blue type’, according to Smith.

The same approach was applied to another brand in the Weetabix family, Nature’s Own, which is renamed Weetabix Organic.

JKR has also created an identity for the Weetabix-owned Alpen brand, ‘resurrecting’ the mountain symbol with which it is traditionally associated so that the ‘whole family’ of Alpen products, including a new range of bars, ‘can hang together’, says Smith.

The consultancy was reappointed to the Weetabix roster at the end of last year and began working on the Weetabix and Alpen projects in November 2001 and January respectively.

Given a make over

Blueprint has designed a ‘water pack’ to appeal to children