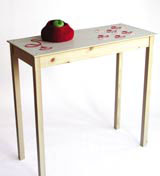 Perforated hardboard, traditionally loved by children and used in hardware stores to display tools, is the central feature of a table from designer-maker Electric Wig, which is unveiled at the Designersblock show in Milan from 9-14 April. Designersblock is timed to coincide with the annual Milan Furniture Fair. The hardboard forms the top of an embroidered table, and the holes are threaded with cotton to create shapes. Objects formed from excess material are attached to the tables, such as a cotton bookmark on a bedside version, a knitted fruit bowl on the side table (pictured) and a tea cosy on a larger kitchen table. Based in Liverpool, Electric Wig is supported by the Crafts Council’s Next Move scheme. Next Move is a two-year national scheme that was set up by the Crafts Council and North West Arts to provide the support that graduates of creative courses need directly after leaving college or university.