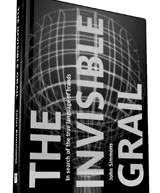 John Simmons’ previous book, We, me, them and it, was an unexpected hit on Amazon’s business best-seller chart. Unilever chairman Niall FitzGerald, Bank of England deputy governor Mervyn King and FHM magazine all sung the author’s praises. His premise, restated in The Invisible Grail, is that words are ‘a poorly used, misunderstood and neglected resource’ in most companies.

Much business writing is so dog awful that Simmons is as welcome as a breath of fresh air. Not for him the fatuous and impenetrable jargon that characterises many management tomes; Simmons’ language looks you in the eye.

But he is not interested in offering an easy read. Simmons encourages brands to write better, to liberate their employees to write more creatively, by achieving a better balance between company, individual, audience and message. ‘The world’s biggest brands are immensely well recognised, but not always well loved,’ Simmons writes. ‘Businesses now need to build brands that go beyond a simplistic reliance on the heavy artillery of logos and advertising, because there is a subtler campaign to be fought.’

‘Guerrilla warfare [is] going on’ over the role of brands in society. Many consumers may be neutral, but the effect is still felt. The proponents of No Logo are noisy and ‘the other side has not yet marshaled its arguments to make an equally effective counter-attack’.

Simmons probably sees himself as a non-combatant. His mission is certainly humanitarian – ‘words into ploughshares, swords into pens’ – but it is clearly concerned with a new brand order.

‘The challenge for any brand is to gain effortless recognition of and identification with its values. Stories are a powerful way to do so,’ he maintains. Big brands have ‘organised themselves out of the ability to be light and engaging with words’ – can they learn from smaller players, ones in touch with their founding spirit?

Egg, Innocent and Lush are the examples he gives. And each has an undeniably fresh and positive approach to language. In every instance, there is something artfully, winsomely child-like about the words used.

But consider what they are selling and it feels a bit motherhood and apple pie. Or, in this case, organic bubble bath and fruit smoothies. Financial services is the obvious exception – but is Prudential’s fledgling distinctive by virtue of not resembling its competitors or is there more to it?

This seems to worry Simmons too. ‘I wonder if Egg is becoming tamer and less differentiated, or whether the changed environment has made that seem so?’

The set-piece battle of Simmons’ quest – largely absent from the text – should be with the dirty grubby things of commerce, not the consumer desirables. After all, this is surely Naomi Klein’s point, that the branding of big corporations has become simply a veneer, a hollow promise. ‘Brands need more jokes,’ Simmons quips. Whither the gag-writers for Shell, BNFL and McDonalds?

It seems to be a problem of scale. ‘Trust me, I’m big’ is a classic marketer’s refrain. But increasingly the opposite is true. Brands are mistrusted precisely because they are big. ‘Is this [honest and engaging language] sustainable as the company gets bigger?’ Simmons ponders. The implication is no, more often not.

Simmons observes a ‘mutually reinforcing growth cycle’ between global brands and English. The most fascinating section of The Invisible Grail deals with Orange’s bid to translate its iconic strapline, ‘The future’s bright, the future’s Orange’, into other languages. The French opted for ‘Le futur, vous’aimez comment?’ – ‘a Gallic shrug, rather than the positive, optimistic belief inherent in the English line’ – prompting the thought: do Anglo Saxon economies buy into branding more than those in other cultures?

Of course, the French have always carried off elitism with snooty elan – from haute couture to les grandes Ã©coles – but would they talk of brands in the same terms as religion? The question is relevant because what Simmons calls ‘fusion language’ is thriving. More people speak English as a second language than they do as a native tongue. Inevitably, that changes things. ‘Who’s in control of this?’ Simmons asks. The answer is no one can be.

Storytelling ‘within a common framework shaped by the brand values’ is Simmons’ holy grail. ‘[It] provides the connection between two people, between teller and listener, writer and reader, individual and employee, brand and customer. There are many possible points of connection. The real power of a story is that it enables any number of different connections to be made.’

But this is the tension in Simmons’ thesis. If stories are open to multiple interpretations, how does this square with brand consistency? Brands can’t control people’s imaginations. They have to trust consumers to evangelise on their behalf, which means being at the mercy of non-believers and heretics as well.

The book’s ‘whodunit?’ mystery suggests the trouble with brands is that they trade in simulated emotion. Can they ever be the real thing? Simmons wants to add linguistic spice to corporate stodge – ‘a slice of ginger in boiled rice’ – and his aims cannot be faulted. But perhaps over-claim, and the resulting inflation of expectations, is actually the heart of the matter?

The Invisible Grail is fond of quotations. Here is something aphoristic from William Carlos Williams, a poet Simmons also cites: ‘No ideas but in things.’ In other words – and this is where design comes in – stick to the particular. When brands get ideas above their station, they appear little more than convenient fictions.