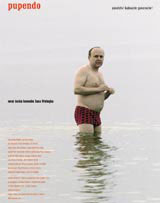 Then there is his involvement in the film world. A handful of young Czech directors and producers come to him for their graphics. ‘He almost has a monopoly on film posters,’ says Zykan.

A flavour of the alternative and the ironic runs through all this work, which is unsurprising, given the nature of his country’s regime up until 1989. ‘My work from that period is full of cultural references and jokes,’ Najbrt says.

This tendency makes the second strand of his work all the more contrasting. Hot on the heels of Czechoslovakia’s Velvet Revolution came the market economy. Through the new government’s capitalist policies, whole business sectors were opened up to competition, either locally grown or from abroad. For the first time, what a product or service looked like and stood for mattered. The discipline of corporate identity had landed. Najbrt has secured a number of big identity jobs, from Altron, a private energy supplier, state oil company Unipetrol, agriculture conglomerate Agropol Group, and Rainbow Energy, the state electricity company, which was named by Young & Rubicam.

Czech corporate identity may not yet be taken particularly seriously by outsiders, but that, say the designers, is partly their clients’ fault. ‘There’s good quality in five or six studios,’ says Najbrt, ‘The problem is conservative clients.’ They’re accused of being an unsophisticated lot, not much interested in fully implementing a look and feel across their organisation.

‘Under communism, nothing evolved,’ says Najbrt, making clients, even 15 years on, averse to bold brand statements. He laughs when I ask if many of them have brand managers.

But that’s not to say all corporate work is cautious and unimaginative. The creative thinking behind some of Najbrt’s annual reports shows what can be achieved. For the past seven years, his studio has designed the annual report for Agropol, each with a different theme. One year saw all of Agropol’s subsidiaries represented as stars in a constellation, and the following year, the report came with a specially designed children’s board game illustrating the company’s different business interests.

While corporate work is going well, the groovy jobs have not dried up. Take the studio’s graphics for Prague’s first modern boutique-style hotel, Josef, which opened two years ago and was designed by the London-based Czech architect Eva Jiricna. And last year, the city of Prague launched its very own Najbrt-designed brand identity.

Meanwhile, Najbrt has just finished posters for a cultural event called Prag in Hamburg, and his consultancy is creating the brand for a world music festival, Colours, in the Czech town of Ostrava. This should all bode well for Najbrt’s international profile, but he admits there’s a way to go yet. ‘Britain and Europe aren’t paying much attention to us yet,’ he says. ‘We need a stronger, more expressive generation – which will emerge. There certainly is a heritage to continue.’

CzechMania is in Birmingham (various venues), from 14 May-31 July. Visit www.czechmania.com

Clients should divide their initial budgets