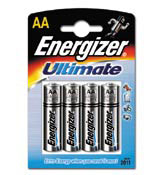 Energizer is set to introduce a new look created by Leahy Brand Design, which is undertaking a raft of projects for the battery brand.

A super-premium battery called Energizer Ultimate is being added to the product range. It has been created by the consultancy, which is also working on pack design and naming for two forthcoming Energizer products, a lithium battery and a flashlight, which are expected to launch in the next couple of months.

Leahy has moved away from Energizer’s historical orange, yellow and red ‘galaxy’ palette, introducing electric blue and silver foil to the packaging of the Ultimate range. The packs also use a ‘trapped blister’ rather than the previous ‘face-sealed blister’. Leahy creative director Tim Leahy says this design allows embossing, metallic inks and foils to be used on the card.

The group was also involved in the naming of the Ultimate range, which has been introduced to encourage consumers to trade up to a battery that is specifically designed for high-performance devices such as portable music systems and cameras.

‘The reason for the redesign was to bring consistency to Energizer products, which have been rationalised to a standard, premium and super-premium offering,’ says Leahy.

The design will be rolled out across Europe.

Leahy Brand Design won the work as part of its ongoing relationship with Energizer.