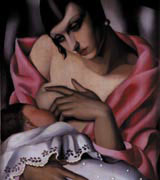 Her inclusion of skyscrapers or telephones advertised her enthusiasm for modernity. A proto-ladette, she once painted herself at the wheel of a Bugatti, an eloquent expression of her position in life – literally and metaphorically in the driver’s seat.

De Lempicka’s work has often come under fire for being decorative and – to use that aptly camp-sounding word meaning superficial – jejune. As one Observer critic sniped: ‘Lighting by Ingres, tubism by LÃ¨ger and lipstick by Chanel.’

Not that the Royal Academy of Arts – where 55 of her paintings are about to go on show – agrees. ‘The RA likes to put on innovative exhibitions, and we feel de Lempicka was unique,’ says co-curator Simonetta Fraquelli. ‘She doesn’t fit into any art historical category. Another reason for the exhibition is that she’s never had a one-woman show in Britain.’

Its timing is perfect: the V&A’s recent Art Deco show was its biggest hit ever, while, in fashion, the spring/ summer 2004 collections were awash with flapper frocks.

The hyper-mannered style of de Lempicka (who died in 1980) borders on the vacuous. And there’s something unsavoury about her early work’s similarity to Milan’s Mussolini-affiliated Novecento art movement. Yet by often foregrounding women as emancipated, her work highlighted radical social changes which saves it from being inanely decorative.

Brits, Yanks and their toothless opinions

Transport Museum back in gear