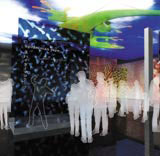 Since it fell on tough times, Japan has stopped making waves in the West. But recently, films like Hayao Miyazaki’s Oscar-winning Spirited Away are a reminder that Japan is a nation with enormous cultural heritage. The country has done a good deal of introspection since its fall from economic grace. And next year’s World Exposition in Aichi will seek to underline its commitment to an altogether different future in the ‘new global society’.

Last week, a consortium was appointed by the Foreign and Commonwealth Office to design and build the UK pavilion at Expo 2005. With a modest budget of £3m (Canada is spending £7m), the FCO signed up a three-pronged team consisting of Ten Alps Events, Land Design Studio and the Natural History Museum. This is the team that will build the British showcase.

For those who don’t know it, the Expo is an enormous, worldwide cultural event, that has taken place every five years since 1851. It is hosted by a single nation, which invites participants from more than 100 countries to pool their history and innovation. Organisers have developed thick skins over the years too; aging armchair critics love to lambast what they see as an extravagance.

Undeterred, UK design consultancies took part in a British tender at the start of the year to design something to fit the Nature’s Wisdom theme of the event. It’s a ripe source of work for this country’s designers: Malcolm Garrett, for instance, now creative director with Immersion Studios of Toronto, is helping to design the Canadian entry (DW 11 December 2003).

Next year’s event in March promises to be outstanding. Not only is the aim to show off sustainable product, technological and engineering designs from around the world, but it is an attempt to do so in an enviromentally friendly way. Units have been prefabricated for each country site, to encourage minimum use of materials, and sections such as the Eco-Communities development are being made from entirely recycled products.

Toyota is designing an Intelligent Multimode Transit System fuelled by hydrogen, to transport the 15 million visitors around the site. The ‘non-mechanically linked’ vehicles move in ‘platoon formations’ and are the first opportunity Toyota has had to develop its prototype designs. A ‘magnetically levitated’ cable car is also being designed for Expo visitors, which will be the first of its kind.

‘It will be a very different experience to the last Expo in Hanover in 2000,’ says Ten Alps managing director Tim Spencer, who plans to create a technologically enhanced garden with half of the UK space.

‘The designs still need to be agreed, so we can’t say too much at this stage, but we won’t be starting with something as simple as an English garden for drinking tea. Technology will play a major part and it will be designed to sit easily inside the Japanese surroundings,’ he says.

Land Design Studio creative director Higgins says the pavilion will demonstrate how ‘nature has inspired mankind through the eyes of the British’. He describes the inside part of the pavilion as ‘very focused’ with innovative, ‘multi-sensory’ displays encompassing engineering and architectural achievements.

‘We want to use sensory stimuli, so we are creating intuitive, digital interfaces which activate little background stories,’ explains Higgins. ‘The messages have to be very precise and very clear.’

He adds that the outside garden area, which is being designed by Andrew Grant, will complement it by being much more ‘generically focused’ to tie in with the bigger themes of the Expo.

Among the other attractions for young and old will be a ‘food and fun’-themed Treasure Island, an Arts of Life exhibit that combines visual attractions such as fine art and performance art, and a corporate pavilion with a giant ‘mountain roof’ in the shape of Mount Fuji.

In line with the natural theme, Hitachi is creating a rare animals ‘future experience’, while a genuine frozen mammoth is being excavated from the Siberian permafrost for display at Expo. Moreover, technology will be used to create virtual reality reincarnations of extinct species, and a real-time broadcast from a space station is also on the cards.

But perhaps it’s the Japanese mascots Kiccoro and Morizo that best indicate what we can expect at Aichi. Energetic and wise, the ‘forest child’ and ‘forest grandfather’ wouldn’t look out of place in a Migazaki animation.

Role: commissioning, financing and overall sign-off for the pavilion

Role: to lead, build, operate and market the UK Pavilion

Role: to design and art direct the pavilion’s creation