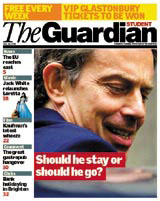 The Guardian has launched a tabloid edition aimed at university campuses in the UK, art directed in-house by The Guardian art director Mark Porter.

The 32-page, full-colour trial version is published weekly and will initially be available to students on five campuses. If the trial proves successful Guardian Student will be launched nationally and published every week during term time.

The move follows speculation that The Guardian would follow rival papers The Independent and The Times in publishing a ‘compact’ version of the national daily.

However, Porter claims that while the emergence of the tabloid student edition is not entirely coincidental with developments in the wider national newspaper market, its design is not a prototype for a possible compact version of the main paper.

‘It is a different design to the main paper, although it follows the philosophy of The Guardian family,’ says Porter.

Guardian editor, Alan Rusbridger, has decided that a compact version of the paper is not the way forward, though other options are being considered. Porter hinted that a version that falls between the tabloid and broadsheet formats is being assessed.