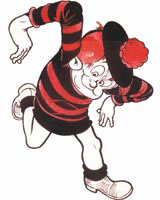 When do you first make the connection between a piece of artwork and its creator? As a child, I was an avid reader of comics like The Beano, The Beezer and The Eagle, but the process of their evolution was a mystery to me.

The fact that all those wacky strips like Dennis the Menace, Minnie the Minx, and the Bash Street Kids were the products of individual imaginations and disciplined, hard-working creatives never entered my carefree little head.

Talking to Leo Baxendale, an early doyen of The Beano creative team, and the subject of an exhibition celebrating the 50th anniversary of some of his best-loved creations, made me painfully aware of the slog that goes into something as light-hearted as a children’s comic strip.

At one time Baxendale was dreaming up and drawing four full-page strips every week, plus ongoing contributions to The Beano and The Beezer annuals. It was a mind-boggling workload that demanded seven days a week. ‘I was a strong young man and I thought I could do anything,’ he says. ‘It was an exhilarating time.’

What he failed to appreciate at the time was that Superman worked for the Daily Globe not DC Thomson, publisher of The Beano. And it slowly became apparent that the workload he had taken on was not humanly sustainable.

Having started out as an all-purpose illustrator on the Lancashire Evening Post, Baxendale went freelance in his early 20s.

‘I was flicking through my younger brother’s The Beano one day and I came upon Dennis the Menace, which had been created some 18 months earlier. It was a revelation. It was completely different from the more established pre-war style of the rest of the comic, much bolder and more subversive, so I wrote to DC Thomson’s saying I wanted to work for them.

‘I got a letter back saying yes, they wanted stuff, but in the old pre-war style that I wasn’t interested in doing,’ he says.

Undeterred, Baxendale sat down and drew his first Little Plum strip about a trouble-prone ‘Indian’ brave and it was immediately accepted for regular inclusion in The Beano. In the same year, he launched Minnie the Minx and the Bash Street Kids, posting his artwork to DC Thomson in Dundee, where it would be camera processed to make letterpress line blocks.

From the outset, he set himself impossibly high standards. His aim was to make every comic seem personal to each child.

Baxendale, still in his 20s, approached the job of amusing Britain’s kids – the circulation rose from 400 000 to two million during his time at The Beano – with all the verve and passion of Vincent Van Gogh.

‘The intensity of creative output was in constant collision with the scale of production,’ he says, looking back. ‘And I had the added burden of doing what they called the “selling pages”, which are the main reason people buy a particular comic or newspaper.’

At the end of 1960, after seven years of working flat out, his body finally held up a white flag and he succumbed to a serious and debilitating illness for several months. After that, he says, he never returned to what he describes as ‘full production.’ In other words, he worked a normal eight-hour day.

He recovered sufficiently to create a new comic, Wham! for the publisher Odhams in 1963, featuring The Barmy Army and Grimley Feendish, among others. Later, he churned out a host of strips for Fleetway-IPC comics Buster, Valiant, Lion and the Monster Fun Comic.

By the mid-1970s, kids’ comics were in serious commercial decline and Baxendale jumped ship and started writing and illustrating books. His Willy the Kid series for Duckworth’s was a notable success and he was unable to resist an invitation to turn Willy into a strip when approached by Dutch/ Belgian publisher Oberon.

More recently he created a strip for The Guardian, I Love You Baby Basil, which he was forced to give up after two years for health reasons, and he saw a High Court action over rights to his The Beano creations satisfactorily settled out of court.

Now in his seventies, Baxendale has deservedly achieved iconic status among other cartoonists and illustrators in Europe. His original artwork has been exhibited all over the UK, as well as in France and Italy. He may miss the exhilaration of those early years, but it is some consolation to be recognised by your successors as a legend in your lifetime.