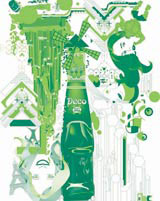 East London: walk up Kingsland Road, past the eastern European garage mechanics fixing cars on the pavement, past the African hairdresser with no customers and the staff asleep in the chairs, past the kebab shops with steel grills on the counters, then turn left into Dalston. There, in a big, sprawling, age-blackened building that was probably once a garment factory, but is now full of ‘cultural producers’, you find the four members of Ã…bÃ¤ke.

Ã…bÃ¤ke are Kajsa, Maki, Patrick and Benjamin – no surnames provided. And as befits the cosmopolitan mix of this part of north-east London, they come from Sweden, France (two of them) and Wales. I meet them in their tiny studio. ‘We’re all old friends,’ they tell me. You’d need to be to survive in this cramped room. I sit down with Kajsa and Maki. The other two get on with their work.

All four are equal partners, but Kajsa has the confident air of a pack leader. ‘We met at the Royal College of Art,’ she explains. ‘Well, three of us did. We knew Benjamin from before.’ I ask them if the RCA proved a good training ground for professional life. ‘Yes, when you’re there it’s just like working life,’ explains Maki. ‘You work in groups, and after graduation we just carried on working in the same group. The RCA teaches you to believe that you can do it on your own.’ Had they thought about going to work for a design consultancy? ‘Who would we have worked for?’ laughs Kajsa, incredulously. ‘Besides, we didn’t get any offers. No one left their cards at our show.’ So, after graduation they moved from Kensington to Kajsa’s bedroom and just kept on working. They did free jobs to start with and then graduated to barter – exchanging graphic design for clothes and furniture – a payment system they still use occasionally today.

Why Ã…bÃ¤ke?, I ask. ‘It’s an obsolete Swedish word,’ explains Kajsa. ‘No one’s quite sure what it means. One meaning is ‘clumsy’. But we just liked it typographically. It’s democratic,’ she adds enigmatically.

I ask them to define themselves: Is Ã…bÃ¤ke a graphic design consultancy? Kajsa and Maki exchange glances. Do they think the question is stupid, or are they just unsure about the answer? I can’t decide. ‘We call ourselves a “graphic design studio”,’ says Maki finally. ‘However, we do other things, too. We design exhibitions. We’re even designing furniture.’

How does Ã…bÃ¤ke attract work?, I wondered. ‘We do something for someone, they like it and they tell someone else,’ explains Maki, as if there couldn’t possibly be any other way to win work. They show me some recent projects; as I examine the work, they point out hidden references that are hard to spot without promptings. Ã…bÃ¤ke’s work for fashion designer Peter Jensen is a good example of this: a poster for a fashion show, it contains references to Gertrude Stein and Jensen’s interest in disco culture, but you’d hardly know this from the poster (OK, the glitterball is a bit of a give- away, but who would know, other than insiders, that it reflected Jensen’s love of disco?).

It becomes apparent that all Ã…bÃ¤ke’s work is braced with subtle internal narratives. Maki explains: ‘Nowadays, people can listen to music, watch television, read magazines and talk, all at the same time. We see our work like this. If you don’t put in details, why bother?’ It’s this emphasis on layers of minute detail that distinguishes Ã…bÃ¤ke from other more style-led contemporary practitioners.

Maki points to a typeface Ã…bÃ¤ke adapted for a band. A regular serif font, it has been subtly bastardised to give fierce, blade-like serifs to certain letters: this has been done to reflect a ‘Metallica influence’ within the band’s sound; a subtle reference, perhaps only appreciated by the client, in this case the band. In fact, clients seem to be the primary focus of Ã…bÃ¤ke’s work. Its clients appear to act more like curators than traditional graphic design commissioners: they allow and encourage Ã…bÃ¤ke to weave subtle allusions into its work, and since most of its clients are creative people (fashion designers, musicians and so on), there is an abundance of source material and creative triggers.

For all its undoubted modernity, Ã…bÃ¤ke bears an unexpected resemblance to classical ‘ideas-led’ design groups like Pentagram, The Partners and Johnson Banks. Ã…bÃ¤ke uses ‘ideas’ as the bedrock of its work, but with one crucial difference; Ã…bÃ¤ke’s ideas are buried and often only detectable by its clients and other ‘insiders’. This doesn’t stop its work being charming and fresh and genuinely different. It just makes you work and think a bit. And how bad is that?