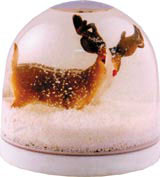 Scottish gallery The Lighthouse has commissioned 20 artists and designers to create a series of contemporary snow domes for its Winter 2003 show. Originally created in the 19th century as souvenirs, snow domes have recently taken on a more ironic persona, says The Lighthouse exhibition manager Leonie Bell. The domes on show include One Foot Taller’s Is it Me, Or Is It Chilli In Here? (left), Timorous Beasties’ Extreme Snowglobing (centre) and Graphical House’s Away from the Sleigh (right). The exhibition, which is designed by Jerki, runs from tomorrow until 11 January 2004.

Pick your business up and drain out the bath