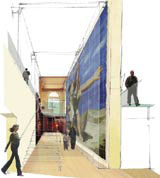 The Victoria & Albert Museum has unveiled plans this week for a £12m overhaul of the Theatre Museum, which will double the amount of exhibition space and open up the entranceway at the Covent Garden site.

Event Communications is handling the exhibition design, while architect Haworth Tompkins is making the improvements to the 2479m2 building.

‘The redesign is opening up the faÃ§ade and letting people see in,’ he adds. ‘Inside, will be a kind of stage display that has a different character by day and by night.’

In the evening, the museum foyer will become ‘a piece of kinetic sculpture’ with performances seen from the street.

The star attraction of the museum’s collection – a theatre curtain from Diaghilev’s 1924 ballet Le Train Blue, designed and signed by Pablo Picasso – will be the focal point of the revamped entrance hall (pictured).

According to Simons, Event’s design reinvents the current ‘maze of spaces’ as ‘larger spaces that relate to each other’. Although the museum’s collection is historically valuable, much effort is going into promoting present and future theatre in the scheme.

Noel Coward’s make-up box and Laurence Olivier’s Richard III costume will also be displayed in the museum, as well as the National Video Archive of Performance, including more than 100 recordings of theatrical productions from the past decade.

Structurally, Haworth Tompkins will unblock windows at ground floor level, creating a brighter space, while the existing entrance ramp will be replaced by a staircase and lift.

Event won the work after a five-way pitch at the beginning of the year. The V&A hopes The Heritage Lottery Fund will respond before Christmas to application for financing, so it can start work in 2005.