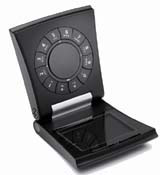 Bang & Olufsen is making its first move into the mobile phone sector this week, under a unique collaboration with Korean electronics giant Samsung Electronics.

The first model to market, Serene, is dual-branded and derives from concepts that were created by B&O’s chief designer, freelance consultant David Lewis. The €1100 (£760) phone will be used to test the market, pending the development of additional designs that are currently on Lewis’s drawing board. Samsung was chosen by B&O to develop mobile technology and engineering for the product. It is the first collaboration of its kind for the Danish company.

The concepts have been in the pipeline for almost four years, but the physical production process began two years ago, according to B&O president and chief executive officer Torben Ballegaard Sørensen. The company’s late entrance into the mobile market is the result of a desire to find the correct technology partner to fully realise Lewis’s designs, says Sørensen.

‘We don’t see ourselves as technology-driven, except in acoustics, but are manipulating technology for the products. We searched globally for a partner with whom we could realise the concepts, and out of this process came a deep understanding with Samsung,’ he explains.

While the Serene’s features include a 2.1 inch screen, embedded camera and 64 polyphonic ring tones, B&O has elected to omit some functionality that is typically available on other premium phones. For example, further ring tones cannot be downloaded and video streaming is not supported.

This approach goes against the grain of the consumer electronics sector, which tends to promote products on their multiple functionality. ‘We simply kept on and on [with Samsung] until we got our way,’ remarks Lewis.

The Serene’s two halves are mounted on an anodised aluminium hinge, with a motorised opening and closing mechanism. In line with other B&O products, navigation is handled by a thumb operated wheel, with number and letter keys arranged in a ring around the outside. B&O has a long-standing corded and cordless telephone product line, and the Serene operating system integrates with the address books of these models.

For Samsung, the Serene represents the latest development of the company’s desire to position itself as a premium brand, with high levels of product and technology innovation. ‘Samsung is always trying to push the boundaries of mobile phone design and development, and we consistently search for innovative ideas and concepts across industries,’ says Kitae Lee, president of the Telecommunications Business in Samsung Electronics.

• Launches in Europe, Russia and Ukraine in fourth quarter

• In development for two years