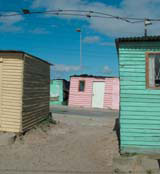 This year’s winners of the Audi Design Foundation’s Designers of Substance competition went to South Africa, to witness first-hand the everyday problems experienced in the poverty-stricken townships and to show their design solutions to locals. John Stones talks to the students about the experience and the challenges involved

Away from the stunning scenery and glamour of Cape Town’s sea front, one third of the city’s population live on inhospitable, flat and sandy ground, in a vast and shocking sprawl of shacks. The township Khayelitsha (which literally means new town) is a legacy of Apartheid, and home to more than one million native South Africans. Despite the racist regime’s demise in 1993, the geographic and economic disparities still challenge the new South Africa, and millions of the black population continue to live without many of the bare necessities, such as water or electricity, with only corrugated iron or cardboard to shield them from the elements.

Rather than follow the usual route of student competitions, the Audi Design Foundation expanded its experiment last year in Rio de Janeiro’s favelas, and, for its Designers of Substance competition, challenged undergraduate designers to devise solutions to some of the most pressing needs experienced in South African townships. In the words of design writer Max Fraser – one of the judges – the idea, rather than creating more aesthetically pleasing objects, was to stretch design students into ‘addressing social implications, practical concerns, infrastructural capabilities, economics, sustainability and, of course, user empathy.’ The briefs revolved around water supply and hygiene, cooking and heating, and space and storage.

Rather than a financial prize, the three winners were taken to Cape Town to witness the townships at first-hand, present their projects and get feedback from the people the designs are supposed to help. It’s an ambitious and laudable, but difficult, undertaking. The dangers of ‘Marie Antionette-ism’ are omnipresent, of prettily playing with poverty. It’s all too easy to create the design equivalent of Sunday supplement photography – in which hardship in developing countries is exquisitely portrayed – or to simply patronise.

Another daunting challenge for the student designers is the sheer design ingenuity of the township residents themselves. If you look for design inspiration at Cape Town’s glitzy sea front, you will come away disappointed. But it’s a different matter in the townships, where severely curtailed resources require imagination from residents to create viable and pleasing surroundings. For instance, discarded, branded, packaging materials, such as soap wrapping or oil cans, are ingeniously pressed into service as wallpaper or children’s toys.

All the young designers had to go on was a short film made by students at the AFDA, Cape Town’s film school. Actually meeting the people for whom the projects were designed was initially daunting, and the reception the students met with was mixed – ranging from overwhelming enthusiasm to, on occasion, resentful boredom.

Michael Farmer, director of the Audi Design Foundation, points out that the scheme is not there to help the poor, but to help young designers. However, the experience in South Africa means the foundation is now looking at deepening its ties with the country to see if it can make the design interaction penetrate deeper. A three-year involvement with South Africa is on the cards, together with plans to enable the three winning young designers to further develop their designs and perhaps return to South Africa next year.

Numbale, a single mother of five living in the Site B zone of Khayelitsha, says she feels no resentment for the white people who visit. ‘You take pictures and you go,’ she says, before asking, ‘Will you come back and make things better?’ That is the real challenge.

Winning design: Ceramic purifying and cooling system that both cleans and cools drinking water, as well as providing a space for food cooling.

Design is there to help people have a better life, and the aim of this project is to help people with their primary needs, rather than create expensive furniture.

It was quite difficult when we got there – I saw the townships driving in from the airport, and I thought, ‘My god, they actually exist.’ But people were so happy with our designs that they wanted explanations about how they worked. The reception we had was so positive that I cried after the presentations. People kept on hugging us.

I think I have improved as a designer after getting so much feedback. As a student in the UK, you are used to making concepts, but not going further. After the reception we got, you feel you would be letting people down if you didn’t actually make it.

Now [the Audi Design Foundation] is keen to take the project forward by making prototypes, but in areas with clay traditions. We met an old man in Khayelitsha, who told us of the rural areas [from which many of the township’s residents have migrated] where there are clay traditions. 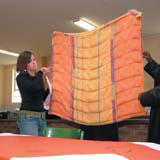 Winning design: Textile wall-hanging filled with sand, that doubles as a fire blanket and provides insulation.

I was concerned at first about what we could bring but, after a couple of presentations, people’s enthusiasm made me change my mind. They really liked my design and wanted to make it straight away.

I realised I could design for situations that I didn’t have first- hand knowledge of, and also that the design process is just a tiny moment in a product’s life. I am now making a visual, step-by-step guide so that people can make my design, but Audi Design Foundation might help with translations into Xhosa. It might also fund testing on the product here in the UK and there is talk of me going back in February. I am worried people will make the wall-hanging incorrectly and that it could lead to cynicism along the lines of ‘great idea, but it doesn’t work.’

Using your skills to go back to basics, rather than worrying about which high-end material or electronic function you can add, was a really good element of the competition.

Project: Fuel that combines beeswax with card or sawdust, to provide smokeless fuel that burns longer and cleans the air.

If I did this project again, I would make sure I used a fuel that was easily accessible. Compared with the other projects, mine wasn’t one that people could take away and use straight away, which was a bit of a shame. I felt bad that I was presenting an idea which needed more work. I think it would have been really good if we had gone there before and developed the ideas together with the people. I felt uncomfortable with simply presenting something we had worked on before.

I was very impressed with the things people in the townships made with throwaway stuff, and I think, as a designer, I have learnt from that. The trip hasn’t really helped me decide whether I want to be a designer or not, but working with people like this was really great. I want to develop the project further, although I am not yet sure in which direction.