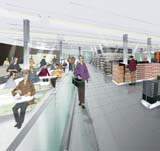 In a bold departure from tradition, Harrods is to ditch its emblematic gold and green branding for the development of its latest concept, a convenience food offer called Harrods 102.

Led by Harrods director of creative direction Susanne Tide-Frater and director of food and catering Didier Souillat, the brand identity for Harrods 102 is being drawn up by the retailer’s in-house design team. But it will not feature the standard Harrods logo, according to a spokesman.

The 7-11 convenience store is scheduled to open in February next year, at 102 Brompton Road in London’s Knightsbridge.

With ‘very modern, sleek’ interiors, the outlet will mark a radical departure from the presentation of the Harrods Food Halls.

‘We are targeting a gap in the market for people who want fantastic food but don’t have time for the vast Food Halls,’ says the spokesman. ‘We will not really offer any Harrods own-label products on this site, so even the bags and collateral material will be completely different to the traditional gold and green.’

The concept has been in development since the middle of this year and could be used as a test bed for further sites around the country, although the official line is that Harrods 102 is the ‘first and probably only’ store of its kind.

The space will feature a number of concessions, including Yo! Sushi, Bagel Factory and juice bar Seaty, and will incorporate health and beauty with food for the first time at Harrods. ‘Urban healing’ company Farmacia will launch what Harrods claims is the world’s first oxygen spa bar, and there will be access to traditional Chinese medicine through Chinese herbalist company Sen.

There are plans for an in-house bakery, branded Fournil de Pierre, developed by the team behind Paul Patisserie. Harrods will also sell its own sandwiches, deli and dairy products, although the full range will remain in the Food Halls.

• Concept is driven by Didier Souillat, director of food and catering

• Aim is to provide convenience for Harrods shoppers