Psychology has always played a role in design, for example, the way colours can affect mood. But now it is being taken more seriously in interior design, particularly when applied to the workplace. John Stones talks to the consultancies who are leading the way in this growth area and asks, are the employers listening?

Psychobabble, snake oil or the future of workplace design? Whichever line you take, psychology is increasingly being taken into consideration in the design of workplace interiors. Workplace stress – or life in the veal-fattening pen, as US novelist Douglas Coupland so memorably described it – alongside issues of productivity and absenteeism, invite answers both from design and psychology.

Other trends, such as a restructuring of working practice that sees people working at home or reconfiguring how they use an office, and an increasingly aging workforce, are also open to psychologically informed design solutions.

Perhaps the most obvious application of psychology in design is through colour. Despite a hallowed history in design – think of Johannes Itten’s colour experimentation at the Bauhaus – it has since been relegated to a zone close to astrology. Angela Wright, a colour psychologist and founder of Colour Affects, suggests colour psychology is used by designers all the time, ‘whether consciously or not’, but often ‘not with any great level of precision’. She says it is usually clients who refer reluctant designers to her. She emphatically defends its scientific validity, the ability of colour to precisely influence behaviours, and is critical of designers’ understanding of colour psychology/ ‘The biggest mistake designers make is to surround people with grey. They think it’s neutral and elegant, but grey induces hibernation – it’s nature’s way of sending you to sleep.’

Ross Hunter, director of Glasgow-based consultancy Graven Images, which is currently working on the interiors for BBC Scotland, says that, in his experience, colour psychology has been ‘utter bollocks – stupid and simplistic’. ‘Just to say yellow will have a certain effect, without thinking about lighting or texture, is nonsense,’ he says.

Andrew Harrison is a trained psychologist and director of research at DEGW, heading up a team of five psychologists, working with 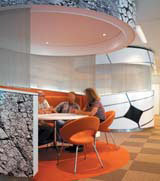 designers in a ‘pretty seamless way, very much at the nitty-gritty end of things’. He says; ‘We are both interested in how people exist and work in spaces. Psychology is a fundamental skill set, and it’s a vigorous approach that can withstand challenge.’ Specialist design consultancy BDGworkfutures also uses psychology in its workplace designs, but does so in conjunction with external business psychologists. ‘It’s about the effective business performance of work space and the return on investment, not whether people are happy – though satisfaction is important,’ says BDGworkfutures director Lydia Ney. She says blue chip companies are increasingly expecting some detailed analysis about how their employees are going to be interacting with each other in new interior designs. For instance, the group’s interiors for Pricewaterhouse Coopers in Birmingham, completed last year, were designed to allow cross fertilisation between different teams of workers, mixing personal desks with open tables. Psychological research showed a greater number of personal desks would be more effective – a lesson that was incorporated in other interiors for the same client. Ney is also working with a large telecommunications company, simply looking at the way in which its workers use space, which suggests that workplace designers are moving into something more akin to process design.

Design Heroine, a consultancy made up of Royal College of Art graduates Harriet Harriss and Suzi Winstanley, has recently completed a project and book of future workspaces for an aging population, called Capture It. Working with Steelcase, Ideo, and DEGW, the consultancy identified behaviours and created interactive tools to enable them to function, such as Grow – acoustic flowers that allow workers of different ages to exchange their experiences.

Winstanley questions whether many companies take psychology seriously in their workplace designs, and says that, when she presented the research to management consultant Accenture recently, there was a resistance to acknowledging the workplace environment as a factor in its employees’ work efficiency or satisfaction.

She suggests that the application of psychology to workplace design will lead to increased interactivity and embedded technology, making it a more personalised and playful environment. However, the psychology of making the workplace more enjoyable may become apparent, and fail in making us work longer and longer. •