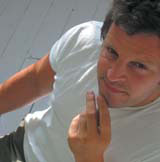 Rock Galpin, fresh from winning the Laurent-Perrier Design Award, believes in injecting a little sexuality into his work, whether it’s a sofa, bar interior or set of glasses. Caroline Roux meets the designer

There are a lot of design prizes around these days, some with a lot of money attached. Rock Galpin, the product and furniture designer, was recently awarded the Laurent-Perrier Design Award 2005, walking off with £2000, a pair of Laurent-Perrier candlesticks and a jeroboam of champagne.

‘Well, it’s not all about money, is it?’ he says cheerfully a week later, when the champagne is, doubtless, long gone. Galpin has always been known as a man about town, especially in the heady days when he operated out of a huge living/work space in Shoreditch. From his super-size loft – from 1997 until recently – he ran his own outfit called Studio Orange by day, and led a fully-fledged social life by night.

It’s unsurprising, then, that Galpin has always been such a successful contributor to the bar design scene. ‘He did great work for us on the Light Bar in Shoreditch,’ says Andrew Waugh at architect Waugh Thistleton. ‘We gave him a design outline, but he transformed it into a really good design product – big, chunky, brown leather sofas, with wooden boxes on each end. I mean, they’re still there now, after five years, and 5000 people a week go through that place. That tells you something.’

Galpin won last month’s prize with something rather more refined. Alongside his heavy duty bar furniture (more recently he kitted out the Tabernacle, also in London’s East end), he has always produced slick domestic products which concentrate on line and colour – such as a lounger for Heal’s in 2004 and the modular Kama system (christened by Alan Fletcher), for Aram, that really kick-started his domestic designing, way back in 1995.

‘My work is very controlled,’ says Galpin, who did his first degree in 3D Design at Wolverhampton, before completing an MA in Industrial Design at Central St Martins College of Art and Design in 1990. ‘The geometry is considered. There’s nothing there for no reason. A certain curve is in a certain place for a certain reason, though that reason might be aesthetic rather than purely functional. You do need to balance that precision with curves – something with sexuality that’s a little more free-form’.

‘Of course,’ he adds, ‘some designers go too far with that sexual curve. You have to be Ross Lovegrove to get away with it.’ This, from the man I once saw at a nipple-twirling burlesque show, entertaining a table of six women in Hoxton. 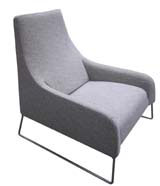 The Laurent-Perrier prize pieces – the Sketch sofa and the Easy chair with foot stool – were designed for upscale furniture and fabric company Designers Guild, which is what made Galpin eligible for the prize in the first place. The award aims to honour designers who have worked to a brief set by a manufacturer or retailer. In Galpin’s case, Jo Willer, creative manager at Designers Guild, was looking for an independent designer to expand the company’s range. ‘We were looking for a kindred spirit,’ she says, ‘but one who had more experience than us. We wanted our chosen designer to work with our existing manufacturers in Italy, but to push them further. It worked perfectly with Rock. He made them try out different foams he’d used elsewhere and now everyone’s happy. The product is great.’ Willer was particularly pleased by the reaction at the Abitare show in Italy in September. ‘We’ve had a number of calls since then,’ she says.

Galpin’s other recent project, however, is the one you’re more likely to see first. It’s a reinvented Baileys glass coming very soon to a small screen near you. ‘[Advertising agency] Bartle Bogle Hegarty came to me, to design something more masculine for a new £2m Baileys campaign,’ says Galpin. ‘The original tumbler has a round bottom. I’ve made it square, to be more masculine, with an illusion of an ice cube in the base. The idea behind the design is a combination of ice (the base) and a swirl of cream (the round top).’

With that, Galpin is off to his next assignment, a manufacturer in Bari, southern Italy, about which he is tight-lipped. But he doesn’t leave without showing me a set of tea cups in six different shapes and sizes, which, nonetheless, stack together and yet – as a little joke – contain the same amount of liquid. From bar design to tea cups, via champagne and Baileys. You have to admit, Galpin does it differently.