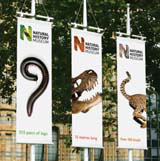 Judged largely by a panel of design clients, with a remit to award Benchmarks to entries deemed to have raised the bar in their category, the scheme has been set up to measure the success of strategic branding projects implemented across multiple media channels. Among the 13 opening categories, Benchmarks were awarded to entries from nine categories. From these, a Best of Show and a Runner Up were selected.

The Best of Show was unanimously awarded by the judges to Hat Trick Design for its vivid modernisation of the Natural History Museum’s branding by Wolff Olins, already well-established as an iconic brand marque and affectionately referred to as the zebra’s bum.

The London consultancy’s entry in the public sector category was singled out for the simplicity and effectiveness of its ‘power of nature’ theme. As well as projecting 35 bold images of wildlife photographers through the lens of a generic N-outline for the logo, the brand collateral uses all the power of graphic design to captivate with its wild messages. The judges commended the work as a ‘full identity’ in every sense.

Runner Up was London consultancy L & Co for its ‘value-for-money’ branding of Estonian brand Diil Mobile Network, under the telecommunications category. L & Co’s reworking of the English word ‘deal’, which became the theme of the brand design, aims to attract a younger mobile user.

In the financial services section, a Benchmark was awarded to Interbrand for its rebrand of Barclaycard. The project was judged to have displayed ‘consistency of application’ and ‘fresh thinking’ with its distinctive, blue, B-shaped card design, which doubles as its identity, while its reworked gold Barclaycard logotype retains the distinctive heritage of the marque.

Landor Associates’ ‘helios’ branding for BP was awarded a Benchmark for the extent and consistency of its application across the organisation, according to the judges. The branding has been rolled out globally in a project estimated to be worth $32m (£18m).

BP’s new marque, inspired by a marble mosaic on the ground floor of BP’s London head office, evolved the brand’s iconic green and yellow colours in a new design, which broke away from associations with its traditional shield. Unilever’s equally radical rebranding by Wolff Olins, in celebration of the fmcg group’s 75th anniversary, was awarded a Benchmark for the ‘strength of its applications’. The central marque was reworked by the consultancy using a collage of icons representing 25 of its core products and applied across its entire range of visual communications.

The Nest’s branding programme for Neal’s Yard Remedies was awarded a Benchmark in the toiletries category for its wide-ranging and subtle redesign of the natural health company. As well as creating clearer distinctions between bottled and packaged products on-shelf and focusing the brand guidelines to appeal to mainstream consumers, the consultancy oversaw the redesign of the brand’s Crescent store in London’s Notting Hill Gate.

Elmwood’s ‘very innocent’ branding for Envirotech won favour with the judges for its wit and humour in the professional services category, and also for its saliency as a communications strategy in the non-hazardous waste management sector.

A Benchmark was also awarded to Together Design for the effectiveness of its UK brand positioning for German wine maker Thielen in the food and drink category. The work was praised for its ‘exquisite’ and ‘humorous’ design.

Luton’s Butterfield Morris Bushell took the final Benchmark awarded this year, in the property and construction category. The group’s communications campaign for BAA’s Terminal 5 was praised for being matter of fact and ‘without pretense’.

The entries in the sport, leisure and travel, household goods and retailers categories were not judged to have made Benchmark standards.

Pied à Terre shoots for another star with makeover