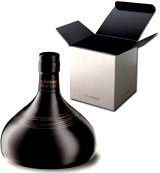 The brief: to create an identity

for a new super premium blended

aimed at the sophisticated

retailing at £40 a bottle

According to Coley Porter Bell creative director Martin Grimer, ‘Chivas came to us with a very challenging brief: to create an identity for a super premium blended whisky that completely challenges the traditional perceptions of whisky – and the super premium white spirits market. It had to be something very special, targeted at high-end urban sophisticates who drink in cutting edge cocktail bars at select locations around the world.

You tend to associate white spirits such as gin and vodka with youth culture, yet whisky has remained older and very traditional, dad propping up the mantelpiece, that sort of thing.

Chivas wanted to reposition its product to a younger, aspirational audience, opinion formers, ‘style people’ who drink at the leading cocktail venues, such as London’s Sanderson Hotel and Lab.

Grimer says it was really exciting to be able to do something different – essentially to create an identity for a revolutionary Scotch.

Chivas had already decided on the black curved bottle shape balanced on a glass bubble at the base, (which makes it ‘spin’), but it had been dressed in a more traditional way. ‘We decided to strip it back to something very iconic; it already has a lot of theatre, with the ritual of the spin,’ says Grimer.

‘The idea of the lines around the bottle was to contemporise the swirl of the product in the glass,’ Grimer explains. ‘We wanted to build intrigue into the bottle so that when you actually spin it you get the mesmerising lines playing a visual trick with your eyes.

‘The fine copper wire ring neck tag creates perfect empathy with the lines around the bottle. That was a real challenge production-wise, a bit of an adventure, but we got there in the end,’ adds Grimer.

The packaging, a quirky warm champagne colour, follows on from the bottle. The graphic of the lines suggests the silhouette of the bottle shape, because the shape is so iconic. The lines overlap to give the suggestion of movement.

Chivas Revolve was launched in London at a backstage party after a Madonna concert this spring. ‘It was a very understated launch, not the kind that is supported by big, brassy ads,’ says Grimer. ‘It’s going to be word of mouth, super cool, really low key.’

CPB started by doing the packaging and visual planning, but the project became a complete brand identity. For instance, it involves beautiful cocktail guides and kits for cocktail barmen around the world, and the consultancy is also looking at all the printwork. ‘It’s a holistic piece of branding,’ says Grimer.

According to Gustavo Claus, global marketing manager, Super Premium Whisky, Chivas Brothers, ‘We asked three design consultancies to pitch and CPB came up with some sensational ideas straight away – a bull’s eye on briefing, in fact. The CPB team perfectly understood our concept of being very sophisticated without being brash or over the top; [it was] a great relationship right from the beginning,’ says Claus.

‘It’s a real challenge to create something in the whisky business to appeal to a very style-conscious, upmarket audience and they did it with a lot of passion and involvement.

‘This is a soft launch: Revolve will only be available in selected upmarket cocktail venues in London for a two-month period and key Duty Free airport stores after that. We plan to move it into top end London retail stores by mid-November and it will then roll out to the world’s style capitals in the following 12 months,’ adds Claus.

How to make your marque