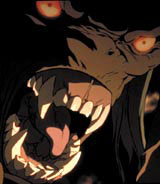 Bedroom boys (and girls) of the world, rejoice. You know how manga has always had a bit of a bad reputation in terms of thoughtful narrative? How detractors bang on about storylines dumped in favour of OTT action sequences involving big-eyed, snub-nosed PokÃ©mon-type characters? Well, the release this week of Blood: The Last Vampire, may be set to change those perceptions and raise manga’s profile a notch or two.

Blood emerges trailing a swathe of awards, including Best Feature Film at the World Animation Celebration 2001, the Grand Prix in Animation at the Media Art Festival of the Agency of Cultural Affairs and a Special Award at the Takasaki Film Festival. So what’s so special about this movie? High production values (it was produced in Hollywo

od using CGI techniques) and the first all-digitally animated manga release play a large part, but beyond that it’s also beautifully drawn and skilfully mixes both 2D and 3D graphics to achieve a visual feast that goes beyond the usual simplistic fare to act as a thought-provoking allegory on global relations.

Set in 1966, the action takes place inside a US air base in Japan, where a nervous American military is at war with Vietnam. In a plot suggestive of The X-Files meets Buffy the Vampire Slayer, a mysterious pair of American secret agents learn of mutated vampire bloodsuckers offing civilians in the base and instruct an equally mysterious young girl, (Saya, clad in sailor uniform and wielding a Samurai sword with which she savagely dispatches the bad guys) to hunt down and destroy them. So far, so simple; it’s an above-par and unusually dark killer thriller, with all the blood, gore, action and suspense that you’d expect.

But what really stands out in Blood are the visuals, which beautifully illustrate the dark melancholy of Saya’s tale. From the outset, around 500 imageboards were created as models for the final pictures, and, as you can see at production company Production I.G’s website (http://www2.production-ig.co.jp/), these original storyboards are remarkably close to the finished animation, with unusually detailed colour and lighting work.

Under art director Yuseka Takeda, these 2D graphics were laid over extensive 3D CGI backgrounds to achieve a lush and painterly depth (described by The Matrix director Andy Wachowski as ‘beautiful, as if the art of Francis Bacon had come to life’), while a specially composed score and After Effects lighting gives the whole a richness that I’ve never seen in animation.

All of this should make you rush out and buy it. But before you do, be warned. Word has it that Blood was created as a multimedia project, the first chapter of a series to be followed by books, a video game and possibly another film. But a lot of very angry punters in manga chat rooms aren’t buying it. Having forked out anything from £10-£30 for the DVD, they’re royally pissed off with a 48minute film whose narrative is a gaping black hole of incomprehensibility, and promises of future elucidation are rightly not appeasing them. Which brings us back to the smug manga detractors, but at least with Blood they’ll have to concede seeing a manga film that’s a visual feast.

Blood: The Last Vampire is released by Palm Pictures on 17 September

I commend consultancies that refuse to free-pitch