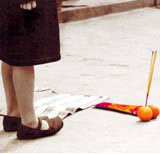 ‘We wanted to create something that was too precious to throw away,’ says Alan Ainsley, design director at Elmwood in Leeds. Ainsley was the project manager for GF Smith’s Book of Truths.

The book was put together to show off the Verus range of uncoated papers, which include three established papers and three new ones.

Elmwood was given the brief in May this year without a pitch because it has an on-going relationship with the paper company. It had only a few weeks to put the book together given that it was to be published at the end of June. The new stock was launched in August.

The idea came from the name of the range, Verus, which means truth in Latin, and the team at Elmwood-mailed everyone they knew to get answers to the question, ‘What one thing do you hold to be true in the world today?’ They got around 200 responses, from people such as Stefan Sagmeister, Rankin and Mara Kurtz. The answers were collected in a 130-page case-bound and section sewn book, which measures 172mm by 127mm and also contained pictures taken from the personal photo collections of Elmwood staff.

Ainsley says, ‘It was quite a tight budget, hence the photos came from people at Elmwood, and [this was] why we chose that particular size [of paper] because we could get more sheets in the book.

‘It was an opportunity to do something creative and a challenge to create something for the design market. An additional plus was that we got the chance to experiment with new stocks.’

The book contains five of the six papers in the range, including a 50gsm Bible style paper, and an even lighter 35gsm cockled finish paper which was machine printed with four colours on both sides, the first time that Elmwood or GF Smith had seen that done. It was possible because printer Triangle had a new Heidelberg machine that was capable of dealing with such a light paper. The sixth paper, Omar, a 315gsm natural manila board, was used for postcards printed with images from the book.

Anthology showcasing look and feel of past 150 years

Shot In the arm

If you want Blood